Packages of Juul mint flavored e-cigarettes are displayed at San Rafael Smokeshop on November 07, 2019 in San Rafael, California. Juul, a leading e-cigarette company, announced that it is halting sales of their popular mint flavor e-cigarette after the release of two studies that showed a surge in teen use.
Justin Sullivan | Getty Images News | Getty Images

Juul Labs has agreed to pay North Carolina $40 million and change its business practices in the state.

Regulators and health officials have blamed the company for the surging popularity of e-cigarettes among teens in recent years. In 2019, federal data found that more than 1-in-4 high school students had used an e-cigarette in the past 30 days, up from 11.7% just two years prior. As of 2020, that number fell to 19.6% of high school students amid greater regulatory scrutiny and the coronavirus pandemic.

"North Carolina is now the first state in the nation to hold Juul accountable for its instrumental role in creating a youth vaping epidemic," North Carolina Attorney General Josh Stein said at a press conference revealing the agreement Monday.

North Carolina kicked off its investigation in 2018 and announced the lawsuit the following year. In May, the judge for the case ruled that Juul destroyed documents, provided thousands of pages of irrelevant information and ignored related court orders. The company faced millions of dollars in fines tied to that decision, but the agreement announced Monday will wipe that slate clean.

Under the agreement, Juul will not be able to target its advertising to minors, use anyone in its marketing materials who is younger than 35 years old or pay for influencers to promote its products, among other restrictions. The deal also places limits on the number of devices and pods that North Carolina consumers can buy every month and year. The $40 million will go toward helping teens who are addicted to e-cigarettes, funding preventive programs and the cost of the litigation.

"This settlement is consistent with our ongoing effort to reset our company and its relationship with our stakeholders, as we continue to combat underage usage and advance the opportunity for harm reduction for adult smokers," a Juul spokesperson said in a statement to CNBC.

The company also said it looked forward to working with Stein and with other manufacturers on developing potential industrywide marketing practices and that it supported the use of the money to reduce underage use.

At least nine other states have followed North Carolina's lead with their own suits, and a coalition of 39 states is currently investigating Juul.

But those aren't the only legal cases with Juul at the center. Tobacco giant Altria is squaring off against the Federal Trade Commission regarding its 2018 investment in the start-up. The agency is arguing that the Marlboro maker engaged in anticompetitive practices when the two companies were trying to strike a deal. Since it made the initial $12.8 billion investment in Juul, Altria has written down its value three times, slashing its value by $11.2 billion. 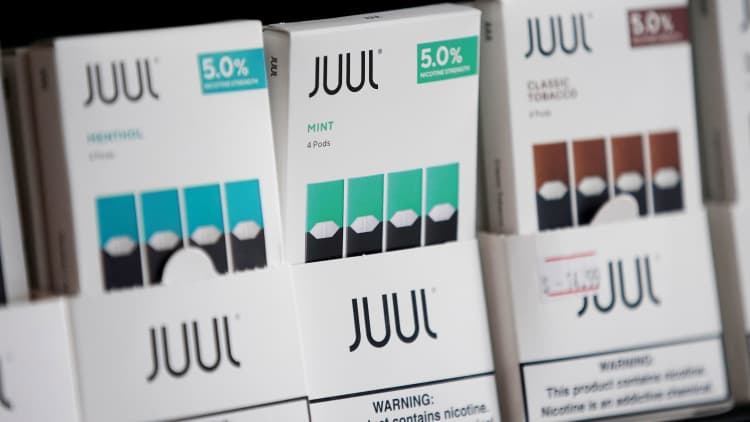