Vice President Kamala Harris will meet Tuesday with Texas Democratic legislators who fled the state in an effort to block a Republican-backed election bill that they say is discriminatory, a White House official told NBC News.

Sen. Joe Manchin, D-W.Va., is also expected to meet with the Democratic members of the Texas legislature, though a date and time have not yet been set, according to a spokesperson.

Only 26 days remain in a special session called by GOP Gov. Greg Abbott to pass changes to Texas voting rules. The Texas Democrats arrived in Washington without a set return date.

"We, as Democrats, we were united, we said we are going to kill any undemocratic efforts in the state legislature. And if that meant leaving the state we were going to do it," said state Rep. Rafael Anchia, one of the Democrats who fled. 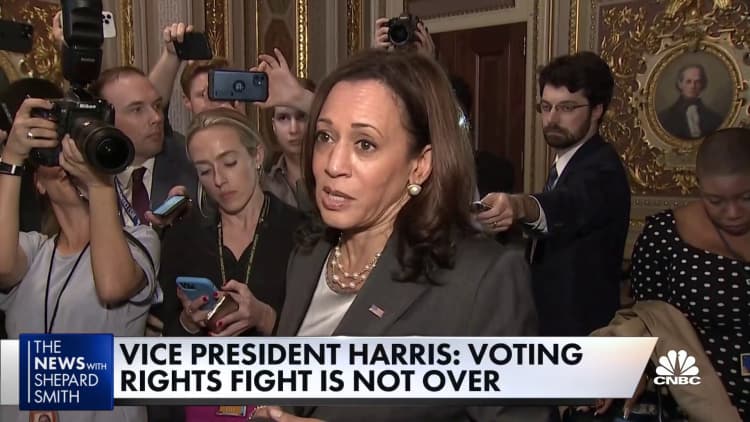 Over the weekend, Texas lawmakers passed two voting measures, House Bill 3 and Senate Bill 1, after extensive hours of debate and testimony. The House was set to reconvene Tuesday morning for a final vote, but the absent Democrats could stall this.

Manchin did not answer Tuesday when asked if he would support a carve-out in the Senate filibuster to pass voting rights legislation, stating only that he is "anxious to meet" with the Texas Democrats. The West Virginia senator has previously expressed steadfast opposition to changing the filibuster.

"Texas Democrats' decision to break a quorum of the Texas Legislature and abandon the Texas State Capitol inflicts harm on the very Texans who elected them to serve," Abbott said in a statement. "As they fly across the country on cushy private planes, they leave undone issues that can help their districts and our state."

The Democrats' departure ups the ante in the state legislative fight and national debate over voting rights. Texas is among several states that have pushed to implement voting measures, which critics say are discriminatory and restrictive, in the aftermath of repeated false claims by former President Donald Trump that the 2020 election was stolen through widespread voter fraud.