CHICAGO – Jim Nierman yells with excitement as he gets out of an electric Mustang Mach-E crossover after a test drive at the Chicago Auto Show.

"Oh my God! ... I've driven a lot of electric cars and that's nice," said the high school auto shop teacher. "It was like a rocket ship."

Nierman, 54, is one of tens of thousands of people expected to attend the five-day event, which is the first major auto show in the country since the coronavirus pandemic began in spring 2020.

It's not a typical Chicago Auto Show. It's about half the size and time of a traditional show, but automakers such as Ford Motor, Volkswagen and others are trying to make the most of it. That includes showcasing new electric vehicles.

Aside from displaying vehicles inside the McCormick Place Convention Center, automakers are offering test drives and rides in new electric vehicles. Auto executives believe such experiential marketing efforts are one of the key first steps to increasing EV adoption.

"A lot of consumers haven't had that opportunity because of Covid," Ford Chief Marketing Officer Suzy Deering said about experiencing the Mach-E. "With Mach-E, people are blown away." 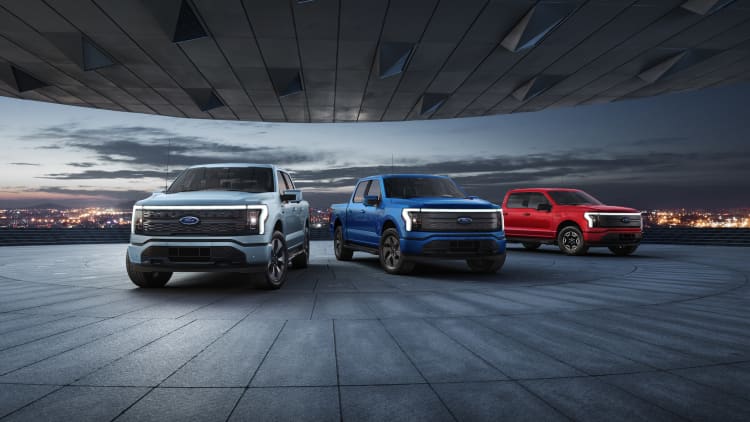 Ford was among the automakers most impacted regarding vehicle launches, including the Mach-E, during the pandemic. An ongoing semiconductor chip shortage also has emptied many dealer lots, making it difficult for consumers to experience new vehicles.

Deering said getting consumers into the Mach-E and allowing them to see new EVs such as the Ford F-150 Lightning pickup, which is expected to go on sale next year, is critical for people to understand that EVs are real and not science projects.

"There's misperceptions about EVs and there's also, candidly, just no perceptions, right? That people just don't understand," Deering said. "It's a really important piece for us."

Auto shows are important for automakers to flaunt their newest vehicles, and more importantly, get "butts in seats" — an old adage for the best way to sell cars.

"Auto shows are important to consumers because they can shop one vehicle against another all under the same roof without any sales pressure," said Michelle Krebs, executive analyst at Cox Automotive. "It's also important to get those butts in seats because, by and large, today's vehicles are all pretty good, so it comes down to their perception of the brand but also how the vehicle fits them."

Volkswagen's test drive booth on July 15, 2021 at the Chicago Auto Show outside of the McCormick Place Convention Center in Chicago.
Michael Wayland / CNBC

Volkswagen of America CMO Kimberly Gardiner said it's "super important" to allow consumers to get into new EVs and "imagine themselves driving one."

VW is offering drives in four of its newest vehicles, including the electric ID.4, which went on sale this year. VW held about 250 drive events across the country for the new EV from March through June.

"We're at this great moment in time where more consumers are wanting to understand and learn about what it's like to drive an EV," Deering said.

Nearly 16,000 people of all ages participated in the nationwide programs, according to VW.

The ID.4 and Mach-E are among a handful of plug-in vehicles, including all-electric and hybrid, to offer rides or drives at the Chicago Auto Shows. Others include the Jeep Wrangler 4xe, Kia Niro EV and Chevrolet Bolt EV and EUV.

Aside from EVs, Ford is going head to head with Jeep regarding off-road courses at the Chicago Auto Show.

Ford debuted a new "Built Wild" outdoor obstacle course for its Bronco SUV at the event, which it expects to use at future shows. Jeep has offered rides at its "Camp Jeep" at such events for the past 17 years.

"It's one of the coolest things here," 15-year-old Henry Lata said after riding in a Jeep Gladiator Mojave through the course. "I love cars."

Both courses feature significant metal hills and obstacles showcasing the capabilities of the vehicles.

"We get to show off what our vehicles can do," said Jim Morrison, head of Jeep's North American operations. "We've seen competitors come and go but, one of the things we love is when they open the door, people race to Camp Jeep."