Before the pandemic, it would take Rob Byrnes at least 15 minutes to wait in line and grab a quick lunch at a fast-casual restaurant in midtown Manhattan. Now, in the minority of people returning to office buildings in the area, Byrnes says he's in and out with his meal in under two minutes.

But he'd much prefer to be standing in a line full of people again.

"We're nowhere near where we need to be to have a sustained retail and restaurant climate in this area," said Byrnes, president of the East Midtown Partnership, a business improvement district that spans parts of the 48 blocks in midtown. "It is still pretty quiet."

Many of the businesses that pledged to bring employees back to the office after Labor Day put those plans on ice, potentially into 2022, with the spread of the delta variant and a looming flu season. The delay has been particularly harsh on businesses in midtown, which has the largest inventory of office space in New York City.

As of this summer, nearly 30% of the retail storefronts in Midtown East and around Grand Central were vacant, according to a new report from the Real Estate Board of New York, or REBNY. That compares with a retail vacancy rate of 28.4% on Madison Avenue, and 20.9% on the Upper East Side. It's the highest rate of all of the Manhattan boroughs, REBNY said.

Historically, the Midtown East and Grand Central corridors have maintained a retail vacancy rate somewhere between 10% and 15%, according to the real estate trade association.

"We have got to get people back into the office to keep this economy humming," Byrnes said.

Pre-pandemic, REBNY estimates that the office population in Midtown East and Grand Central was supporting the 2,579 businesses, including eateries. The neighborhood captured about 11.4%, or $6.5 billion, of Manhattan's annual retail sales.

Today, REBNY says 93 of the retail storefronts are unoccupied. On one stretch of commercial real estate across from the high-end department store operator Bloomingdale's, former Gap, Banana Republic and Victoria's Secret locations sit vacant, leaving the entire block along Lexington Ave. between 58th St. and 59th St. street emptied out.

"These findings confirm the crippling effect that the pandemic has had, and continues to have, on the retail sector in midtown," said Fred Cerullo, president and CEO of the Grand Central Partnership. "For these businesses to thrive, they need the kind of foot traffic generated by tourists and office workers."

"They all contribute to the economic ecosystem that generates billions in business activities and tax revenue, which the city also needs now more than ever," Cerullo added.

Storefronts remain barren, even as rents around the midtown area have tanked, a sign that businesses are still holding off on gobbling up space. Or they don't plan to return at all.

From 42nd St. to 49th St. along Fifth Avenue (near Grand Central), average asking rents this spring were $615, down 12% year over year, according to REBNY's biannual rents report. And along 57th St. from 5th Ave. to Park Ave. (Midtown East), average asking rents amounted to $531, a 22% year-over-year decline.

According to Gene Spiegelman, a vice chairman and a principal of the leasing firm Ripco Real Estate, an added layer of pressure stems from the fact that a number of national retailers — including Gap and Victoria's Secret — have been proactively culling their real estate, as purchases move online.

"Companies are also changing their views on flagship retail," Spiegelman said. "So it's complicated beyond Covid. But Covid has not helped."

There is still a long way to go to bring people back to offices. Only about 29% of employees across the New York metro area swiped into office buildings the week of Sept. 29, according to data from the security company Kastle Systems. That was up from 27.6% the prior week. But it was still below a nationwide average of 35%, Kastle said.

A separate survey by the Partnership for New York City recently found that Manhattan employers expected only about 41% of their workers to report into offices by Sept. 30, down from an expected 60% when the survey was previously conducted in May.

"The worst part is that we don't know where the bottom is," said Jessica Walker, president and CEO of the Manhattan Chamber of Commerce. "Tourism has been stymied, which is a huge part of the economy and the foot traffic in midtown, as well." 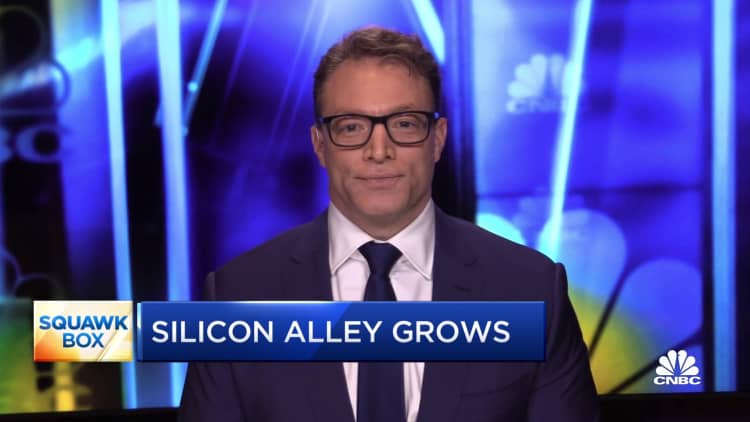