GLASGOW, Scotland — The COP26 climate summit begins on Sunday, with world leaders from more than 100 countries set to take part in what is regarded as humanity's last and best chance to secure a livable future amid dramatic climate change.

That's a gigantic task. And it is for this reason that the delayed summit in Glasgow, Scotland is one of the most important diplomatic meetings in history.

To have any chance of preventing the worst of what the climate crisis could bring, policymakers must outline how to almost halve greenhouse gas emissions in the next eight years and reach net zero emissions by 2050.

The summit's success is likely to come down to a number of key make-or-break issues, such as mitigation plans, climate finance goals and the phasing out of fossil fuels.

A series of extreme weather events worldwide illustrates why COP26 is thought to be the last chance to make the landmark 2015 Paris Agreement fully operational. The Paris climate accord aims to limit global temperature rises to 1.5 degrees Celsius above pre-industrial levels.

Here are those set to attend the event in person:

The U.K. will host the 26th U.N. Climate Change Conference of the Parties, or COP26, from Sunday through to Nov. 12, with heads of state, delegates and campaigners all set to negotiate a coordinated response to the climate emergency.

U.K. Prime Minister Boris Johnson has called on world leaders to make "bold commitments on coal, cars, cash and trees" at COP26, saying "too many countries are still doing too little."

Johnson, who has previously expressed skepticism about the climate crisis, outlined the U.K.'s net zero strategy in October. The Conservative Party leader said the plan, which had been repeatedly delayed, "sets the example for other countries to build back greener."

The net zero plan was seen as a key test as the country prepared to preside over COP26. Critics have suggested it falls short on meeting the demands of the climate emergency.

U.S. President Joe Biden took the world's biggest economy and second-biggest emitter back into the Paris Agreement in one of the first acts of his administration, but he faces substantial challenges to overcome those skeptical of America's climate leadership in Glasgow.

It comes after a bruising period in which his domestic climate agenda was pared down by centrist lawmakers and amid a barrage of criticism that the president's actions have yet to match his repeated assertion that climate change constitutes an "existential threat."

Australian Prime Minister Scott Morrison initially appeared reluctant to make the trip to Scotland but confirmed earlier this month that he would attend after intense pressure from allies.

Morrison has said Australia has a plan to meet net zero by 2050, but the government failed to announce any new policies in a roadmap that critics say is light on detail and over-reliant on "further technology breakthroughs."

The country is the world's second-largest coal exporter, and the Morrison government is committed to digging for more of the fossil fuel well beyond 2030 — a pledge that has made Australia an outlier in the run-up to the talks.

The EU negotiates as a bloc at the U.N.-brokered talks and sees itself as a global leader on climate action.

European Commission President Ursula von der Leyen has called on other countries to match the European Union's ambition to become the first climate neutral continent by 2050, saying ahead of the Glasgow summit that it was imperative to take immediate action.

"The longer we wait, the more expensive it will become. And therefore, it is about action now," von der Leyen said at a press conference on Thursday.

"Africa is tired of waiting," Democratic Republic of Congo President Felix Tshisekedi said in an op-ed published in The Financial Times on Oct. 25.

US President Joe Biden (L) and DR Congo President Felix Tshisekedi joke during a group photo at the G20 of World Leaders Summit on October 30, 2021 at the convention center "La Nuvola" in the EUR district of Rome.
ERIN SCHAFF | AFP | Getty Images

The current chair of the African Union, a regional body of 55 member states that make up the African continent, called on the international community to recognize African countries as a priority at COP26.

"It is time for Africa to be compensated — for the good of the continent and the planet. We have waited long enough," Tshisekedi reportedly said.

Alongside prominent political figures expected to attend COP26, former Bank of England Governor Mark Carney is set to play an influential role in the talks.

The U.N.'s special envoy on climate action and finance told CNBC earlier this month that it is essential to "retool the plumbing" of global markets since financial markets will not reduce greenhouse gas emissions alone.

As chair of the U.N.'s Glasgow Financial Alliance for Net Zero, or GFANZ, Carney is leading efforts to accelerate the transition to a low-carbon economy.

He has, however, previously said that he still sees a future for fossil fuels. Carney has argued governments and private companies could continue to extract, mine and burn fossil fuels if they use carbon capture and storage technology — a process climate researchers, campaigners and environmental advocacy groups say is not a climate solution.

Swedish climate activist Greta Thunberg arrived in Scotland's largest city on Sunday. The 18-year-old was seen at Glasgow Central Station carrying a cardboard placard saying Fridays For Future, the name of the global youth movement initiated in 2018 by her school strikes.

Speaking at the Youth4Climate summit in Milan, Italy in late September, Thunberg said: "Net zero by 2050. Blah, blah, blah. Net zero. Blah, blah, blah. Climate neutral. Blah, blah, blah. This is all we hear from our so-called leaders. Words that sound great but so far have led to no action. Our hopes and dreams drown in their empty words and promises."

Thunberg is expected to take part in a climate strike on Friday.

Most countries will be represented at the U.N. talks in one way or another, with roughly 25,000 delegates set to arrive in the U.K. city.

There are expected to be several notable absentees, however.

Russian President Vladimir Putin, Chinese President Xi Jinping and Brazilian President Jair Bolsonaro are among some of the world leaders that will not attend the summit in person.

In addition to world leaders, Britain's Queen Elizabeth has pulled out of attending COP26 in person after being advised by doctors to rest. Buckingham Palace has said the queen will deliver an address to delegates via recorded video message. 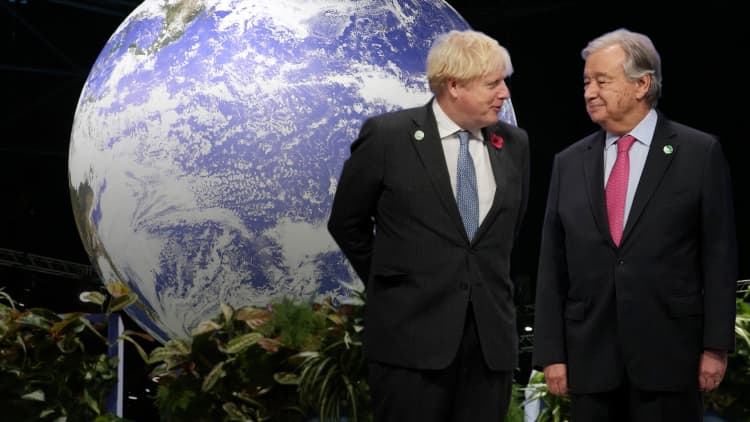