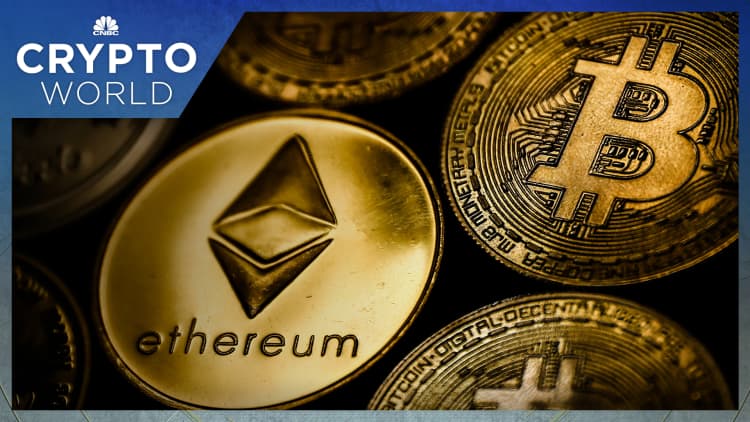 The price of bitcoin fell to a two-week low Tuesday after Russian President Vladimir Putin ordered troops into Donetsk and Luhansk, two breakaway regions in eastern Ukraine, shortly after declaring them as independent.

Bitcoin is often referred to as "digital gold" by its backers. The term refers to the idea that bitcoin can provide a store of value similar to gold — one that's uncorrelated with other financial markets, like stocks.

Bitcoin bulls also see the cryptocurrency as a "safe haven" asset that can serve as a hedge against global economic uncertainty and increasing prices, which reduce the purchasing power of sovereign currencies like the U.S. dollar.

With inflation at historic highs, you'd expect this would be bitcoin's time to shine — U.S. consumer prices last month rose the most since February 1982, according to Labor Department figures. 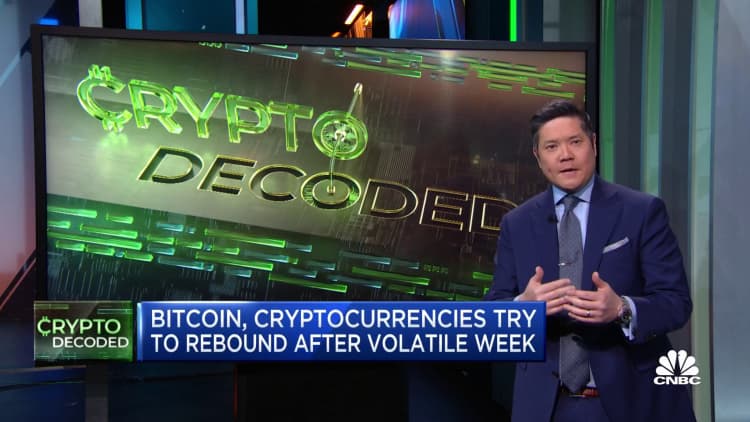 Instead, the cryptocurrency has lost almost half of its value since reaching an all-time high of nearly $69,000 in November. That's led analysts to question whether its status as a form of "digital gold" still rings true.

"Bitcoin is still early in its maturity curve to be firmly placed in the category of 'digital gold,'" Vijay Ayyar, vice president of corporate development and international at crypto exchange Luno, told CNBC.

The latest declines for bitcoin came in tandem with a rout in global stocks, with the S&P 500 closing out Tuesday's session in correction territory. Bitcoin's price has increasingly been tracking moves in the stock market, with correlation between bitcoin and the S&P 500 steadily rising.

Experts say cryptocurrencies have become more closely linked to other speculative parts of the market such as tech stocks, which are falling due to fears that lofty valuations may come down as the Federal Reserve and other central banks begin to hike interest rates and wind down their huge stimulus packages.

"The correlation between crypto and stocks has been high over the last few months on both inflation-related macro news and the Russia-Ukraine geopolitical situation," Chris Dick, a quantitative trader at crypto market maker B2C2, told CNBC.

"This correlation shows that bitcoin is firmly behaving like a risk asset at the moment — not the safe haven it was touted to be a few years ago."

In fact, gold has actually been outperforming bitcoin lately. Spot rates for the precious metal reached their highest levels since June 1 on Tuesday, climbing as high as $1,913.89 per troy ounce.

"Bitcoin, the asset purported to be the answer to every question, has quietly weakened and is notably underperforming its arch enemy, gold," John Roque, head of technical strategy at 22V Research, said in a research note Monday.

"We're looking for Bitcoin to get back to 30,000 and then break below there and we continue to expect gold will make a new all-time high."

Bitcoin's slump has resulted in increased talk about a prolonged bear market known as "crypto winter." The last such occurrence of this took place during late 2017 and early 2018, when bitcoin plunged as much as 80% from then-record highs of close to $20,000.

Not all analysts are convinced the latest downturn in digital currency prices is indicative of a crypto winter, though, with many saying market conditions have changed. There are now plenty of institutions holding bitcoin which, according to experts, is one reason for why it's become more closely correlated with stocks.

"The adoption of cryptocurrencies by investors from traditional asset classes is the driving force behind bitcoin's correlation with equities," B2C2's Dick said. However, he added: "This relationship has the potential to be broken at any time given the different fundamentals for each market."

To compete more effectively with gold as a store of value, bitcoin needs to achieve more widespread adoption, according to Luno's Ayyar.

"The fundamentals have always made sense — limited supply currency not affiliated with any nation state," he said.

"But bitcoin needs to undergo its due process of monetization, where it's held by a large enough pool of participants — more retail flow, larger institutions adding bitcoin to their balance sheets, [and] potentially more nation states after El Salvador buying Bitcoin."