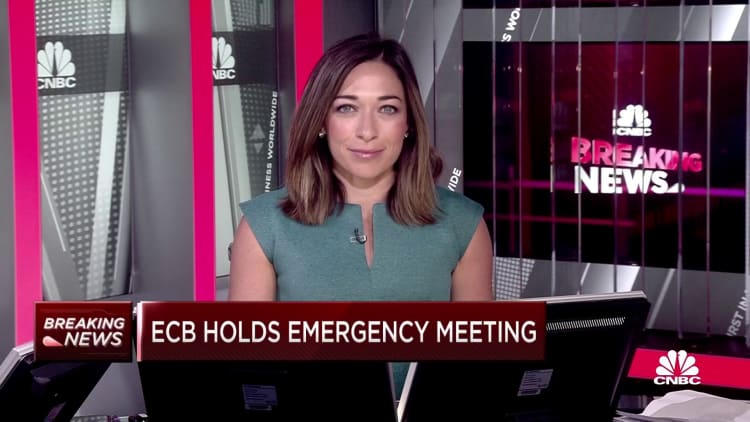 The European Central Bank announced Wednesday that it plans to create a new tool to tackle the risk of euro zone fragmentation, in a move designed to assuage fears of a fresh debt crisis.

The decision comes after the central bank surprised market participants with an emergency meeting to address higher borrowing costs for many European governments.

"Since the gradual process of policy normalization was initiated in December 2021, the Governing Council has pledged to act against resurgent fragmentation risks," the ECB said in a statement.

"The pandemic has left lasting vulnerabilities in the euro area economy which are indeed contributing to the uneven transmission of the normalization of our monetary policy across jurisdictions," it added.

The comments reflect the recent surge in bond yields over the past week or so. After a regular policy meeting last week, the ECB suggested a more aggressive policy tightening but failed to deliver any new measures to support highly indebted nations in the bloc.

This sparked some nervousness among money managers about financial fragmentation and led to an increase in bond yields.

Italy's 10-year bond yield crossed the 4% mark earlier this week — with one economist saying these levels "could eventually turn into a problem" for the south European nation.

To tackle these concerns, the ECB said Wednesday that it will reinvest redemptions from its emergency bond-purchasing program — referred to as PEPP — in a flexible way and it will ask its team to "accelerate the completion of the design of a new anti-fragmentation instrument."

Isabel Schnabel, a member of the ECB's executive board, said in Paris on Tuesday: "Our commitment to the euro is our anti-fragmentation tool. This commitment has no limits. And our track record of stepping in when needed backs up this commitment."

European countries faced materially high borrowing costs in the wake of the sovereign debt crisis back in 2011. Some of the imbalances have been addressed but there are still concerns about the region as a whole, notably because it has one monetary policy for 19 different fiscal positions.

The yield on the 10-year Italian bond traded lower on Wednesday morning, shortly after the ECB announced its unscheduled meeting. The yield extended losses during afternoon deals to trade below the 4% mark.

In currency markets, the euro was higher against the U.S. dollar continuing the trend seen earlier in the session when news broke that there would be an emergency meeting.

"Flexible PEPP reinvestments might buy policymakers a little time, but the new 'anti-fragmentation instrument' that the Bank is working on will need to go a whole lot further," he said. "And there is no guarantee that they reach a consensus on such a tool at the next policy meeting in July, so we could see spreads widen further before a new tool is in place."

Mario Centeno, an ECB Governing Council member, has said that faster monetary policy normalization is a risk that cannot be ruled out, according to Reuters. The central banker added that the pace of interest rate hikes would be "gradual."