Markets
Business
Investing
Tech
Politics
CNBC TV
Watchlist
Investing Club
PRO
Key Points
Russian President Vladimir Putin and Chinese President Xi Jinping pose for a photograph during their meeting in Beijing, on Feb. 4, 2022. The two countries announced a "no limits" partnership prior to Russia's invasion of Ukraine, though Beijing has tried to position itself further away from Russia than portrayed after Xi and Putin met.
Alexei Druzhinin | AFP | Getty Images

Russian President Vladimir Putin is set to take part in his first major multilateral meeting since he launched an unprovoked war on Ukraine.

As the war closes out its fourth month, Putin meets fellow BRICS leaders at their annual summit, which is being hosted virtually by China this year.

BRICS, an acronym for a grouping comprising Brazil, Russia, India, China and South Africa, was conceived in 2006 and held its initial summit meeting in Russia in 2009. The group sees itself as a voice for developing countries.

None of the members have condemned Russia's invasion. Both China and India, the second and seventh largest economies, respectively, have also increased trade with Russia despite international sanctions on Moscow.

Russia, which has been expelled from the SWIFT international bank transfer system, is keen to forge a move away from the dollar, which it sees as the means to U.S. dominance. In previous meetings, BRICS countries have discussed such a move.

Earlier this month, Russian Finance Minister Anton Siluanov warned that sanctions could cause "global stagflation" and a food crisis. He called on BRICS to work together to stabilize the economic situation. In April, Siluanov urged BRICS to arrange trade settlements in their respective currencies and to avoid the use of the U.S. dollar, according to a Russian news magazine, Russia Briefing.

Chinese President Xi Jinping is likely to seek support from BRICS for his vision of an alternative world order, which he introduced at a forum in April as his signature Global Security Initiative. The main premise of the GSI posits that seeking "absolute security" is counterproductive. It opposes the building of "national security on the basis of insecurity in other countries."

GSI may have a backer in Putin, who was in Beijing weeks before he launched the Ukraine invasion on Feb. 24. At the time, China and Russia signed a 5,000-word "no limits" partnership aimed at challenging "global hegemony" without explicitly naming the U.S. 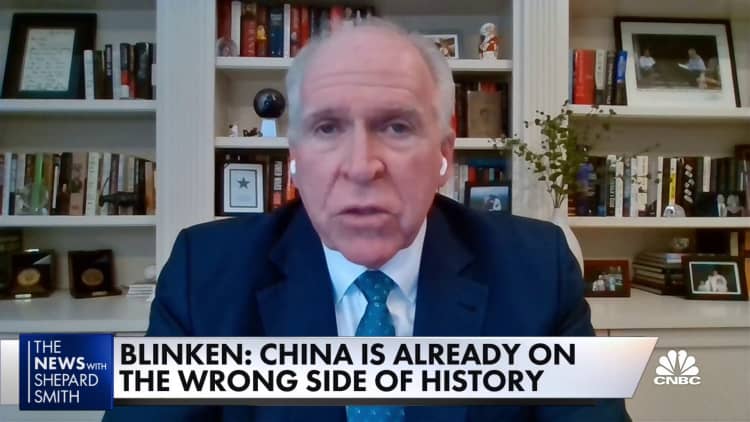 watch now
VIDEO3:0103:01
Xi took Putin at his word that this was going to be a quick invasion, says fmr. CIA director
The News with Shepard Smith

India, however, would balk at a China-led security framework. The odd man out at this edition of the BRICS summit, India is in a bind, constrained by its near-total dependency on Russian arms and its growing ideological and political closeness to the U.S.

India's contrast with China could not be sharper.

Although their policy on the Ukraine war is similar, India and China operate under vastly divergent worldviews. India, a democracy, is locked in a standoff with China on its land border in the Himalayas. Thousands of troops from both sides remain deployed on the highest battlefields in the world, in rugged terrain and icy temperatures. India and China share the world's longest disputed border.

Complicating matters, India depends on Russian-supplied arms. Estimates vary, but suggest about 60% to 85% of India's legacy defense equipment are Russian made. Yet, India is also the lynchpin of the U.S.'s Indo-Pacific strategy, through which the Biden administration is trying to counter an increasingly assertive China across the Asia-Pacific.

"As the China-Russia relationship is garnering momentum, India's relationship with Russia is getting affected. Russia has openly expressed its displeasure about the concept of the Indo-Pacific and the Quadrilateral Security Dialogue, of which India is an important member," the Observer Research Foundation's Harsh V. Pant told CNBC.

'Economy is security': Biden's Quad trip shows that in Asia, trade and security are one thing
The 'Quad' is on the rise in Asia-Pacific: Game theory has a prediction about its future

India is also a key member of the informal security grouping Quad, which includes the U.S., Australia and Japan. Beijing has criticized the group, calling it an "Asian NATO."