In the latest inflation reading, used cars are one of the few categories with prices that are lower than they were a year ago.

While the consumer price index — which measures price changes for a variety of consumer goods and services — was up 7.1% in November from a year earlier, used cars and truck prices posted an annual 3.3% decline. That compares to some categories that have kept climbing far above year-ago prices, such as eggs (49.1%) and airfare (36%). New car prices are 7.2% higher.

Despite sliding prices for used vehicles, they remain 33% higher than where they'd be if normal depreciation were occurring, said Pat Ryan, founder and CEO of CoPilot, a car-shopping app.

"It's important to remember that prices are still grossly inflated compared to all normal market conditions," Ryan said.

"In the new year, we can expect more substantial and accelerated price drops across the board, as vehicle inventory continues to replenish," said Ryan, adding that dealers also are responding to consumers' growing resistance to paying record-high car prices.

Demand in the used car market skyrocketed during the pandemic as supply-chain issues hampered automakers' ability to produce new vehicles. However, the situation is easing slowly with modest improvements in inventory on dealer lots as rising interest rates put pressure on affordability.

While used-car prices are easing from their highs, the decreases depend at least partly on their age and the type of vehicle.

Used electric vehicles have seen the largest drop: The average price of $54,314 in early December is down 20% from a record high of $75,324 in July, according to CoPilot data.

For used hybrids, the average price of $43,574 is a 12% drop from the peak of $49,809 in July. For both segments, whose demand rose earlier in the year when gas prices were headed higher, an easing in gas prices also coincided with a decrease in demand for EVs and hybrids. 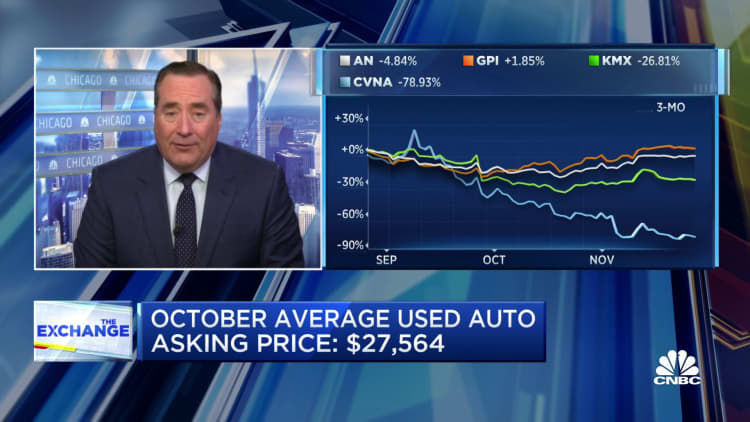 While prices are expected to continue sliding next year, some buyers may not want to wait.

"If you can pay cash now and avoid skyrocketing interest rates [on loans], this month is the best time to buy in over a year," Ryan said. "With prices finally down year-over-year ... and dealers eager to hit year-end sales targets, it could be a good time to negotiate."

For most buyers, however, "our advice is to wait for the used-car market to finally return closer to normal levels in 2023," Ryan said.