Biodiversity represents life on Earth; a vast network of every living thing, with all their countless interactions. To date, according to the United Nations, humans have “severely altered” 77% of terrestrial environments and 66% of marine environments, with one million species at risk of extinction1.

The further biodiversity is eroded, the larger the threat to humanity as it loses the ecosystems nature provides and on which we depend. In short, humanity cannot keep living like this.

Total, one of the world’s top five oil and gas companies, is heeding the call. “It’s time to act,” says Patricia Mani, VP for crisis management and environmental & societal expertise. “We are listening to the scientific consensus and it’s crystal clear, the decline in biodiversity is alarming.”

Having been with the company for 15 years, Mani has a broad remit covering the crossover between environment and safety policy, including oil spill preparedness. Her tone is upbeat, “this is an opportunity,” she says. “Both climate change and biodiversity loss cannot be ignored and in order to become ‘the responsible energy major’ we have to take on these challenges. Regarding biodiversity, we can do that in two ways; good practice, to neutralize our effects on biodiversity, and solutions, going as far as positive impacts on biodiversity on our projects.”

Such an ambition requires an outward-looking vision. Total’s Biodiversity Program sees the group prioritizing this major environmental challenge between now and 2030, particularly for exploration and production, as well as renewables.

Senior environment advisor and biodiversity group lead, Steven Dickinson, has worked in environmental and biodiversity fields for 20 years and joined Total in 2014. He is a contributor and driver of the development of the company’s biodiversity strategy. “It’s all about impact on biodiversity,” he says. “We should primarily aim to avoid it, when possible, by assessing thoroughly any biodiversity sensitivities of a project prior to it starting and as part of the overall decision making including for acquisitions. Reducing it is the next step followed by restoration. Finally, best practice is biodiversity offsetting, a form of compensation on negative residual impacts and generating positive impacts even, which means in certain cases leaving a site in a better situation than that when we arrived.”

“All sites Total intends to work on are assessed through the biodiversity lens,” emphasizes Mani. “If we’re already working on a sensitive site then we’ll be looking at the reduction of impact and creating a dedicated biodiversity action plan based on that.”

They both agree it means making a concerted effort and looking longer-term for results. “It’s only really through trends and over time that we can ever say we’ve actually performed well on a biodiversity project,” says Dickinson.

The Group established the Total Foundation, which promotes far-reaching social and environmental change, in 1992. In the early days the focus was on marine biodiversity, today the Foundation is involved in many projects to preserve forests, mangroves and wetlands.

“It was with the Foundation that the biodiversity ‘seed’ was sown,” says Mani. “By 2005 we had created our first Group Biodiversity Policy applicable throughout our business.”

In 2008 that team’s work came into its own on the southern Yemen Balhaf LNG Terminal project. There was no existing industrial infrastructure at the site, but there was abundant marine life which plays a significant role in the local fishing industry. “It was an eye-opener in terms of biodiversity for the company,” Mani explains. “We ended up transplanting coral, we could not avoid damaging, to preserve it; this was a big innovation for us and one of the first such projects in the world. Suddenly biodiversity was no longer something on the side-lines inside the Group and it was pushed front and center.”

Total began to work on furthering its biodiversity approach in earnest. “It was at that point we started to look at consolidating the principles we’d been following and began turning them into concrete commitments,” Mani continues, “The commitments were developed through a lengthy stakeholder engagement process, involving company staff and a wide range of other partners, including NGOs and conservation groups.”

A perfect example of Total’s biodiversity strategy in action is the natural gas terminal in the Shetland Islands, off the northern coast of the United Kingdom. The Shetland Gas Plant (SGP) was built as part of the Total E&P UK operated Laggan-Tormore gas condensate development.

Total is committed to site restoration at the end of the plant’s operating life and one of the early challenges was working with the peat which covered the onshore site. One meter of peat takes about 1,000 years to form, preserving it will provide the necessary substrate for the specific and sensitive peat habitat biodiversity to be restored.

Peat has been excavated and stored for site restitution in state-of-the-art facilities. It remains saturated with water so that airless conditions are maintained, and degradation is minimized — reducing carbon emissions as far as possible. It is a unique example of biodiversity management and takes the peat through all phases, from planning, construction and handling, while meeting the regulatory requirements for storage and long-term monitoring.

“The project is special because we know biodiversity of temperate peatland habitats and species are very sensitive and best practices have to be followed when operating in these areas,” says Steven Dickinson, “We are confident that after the site closes any medium to long term impacts will be minimal.”

“Colleagues are often surprised at the lengths the company goes to in preserving biodiversity. It shows them just how important our commitment is when they see projects like this one in the Shetlands,” adds Mani. 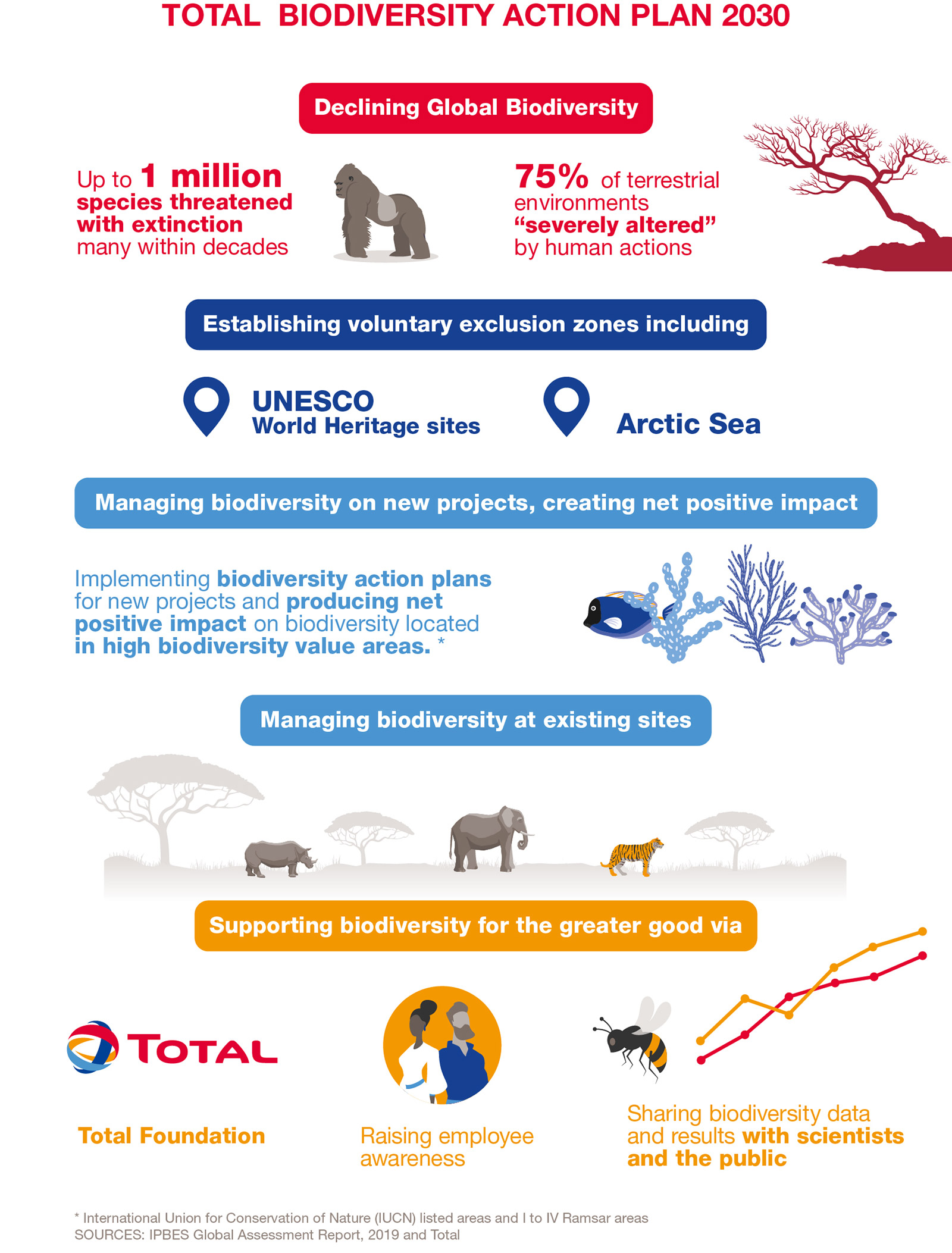 A strategy in evolution

In the last five years, Total has significantly boosted its portfolio in the renewables sector. But for the team focused on biodiversity, this just brings new challenges for the implementation of the company’s environmental strategy. “The range of projects we work on is part of the challenge. The renewables we’re moving into are also part of the work we’re doing concerning biodiversity,” emphasizes Dickinson, “We have to work on all fronts.”

“Biodiversity is a policy decision, inside the Group as well as in the wider world at a global level,” Mani adds. “We are a key industry leader and we have a vision, but we need to work with others to make it a reality. It’s a highly complex interconnected global system.”

Total works on a project-by-project basis with international organizations — including the United Nations Environment Programme, international NGOs and conservationists most suited to the environment they are working in. “Whether large or small,” she says, “We have a number of experts and scientists we work with, such as the French Biodiversity Research Foundation (FRB) in Paris. It’s very varied.”

“The Group as a whole has been very receptive to action on biodiversity. Our top management triggered the development of our recent 2030 biodiversity ambition,” says Mani, “So that’s another positive move forward.”

With operations in more than 130 countries, Total is a top-tier international oil and gas company and a major player in low-carbon energies. We discover, produce, process, sell and market energy in a variety of forms, all the way to end-customers.

Committed to better energy, our staff of 98,000 employees help provide customers throughout the world with products and services that are safer, cleaner, more efficient, more innovative and accessible to as many people as possible.

Our ambition is to become the responsible energy major.

» Visit Total.com
This page was paid for by TotalEnergies. The editorial staff of CNBC had no role in the creation of this page.