‘Apple Has Become a Casino’: Terranova 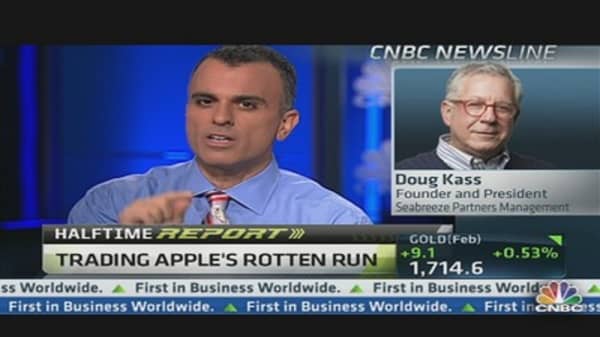 Trading of Apple shares are "problematic," and management could teach the market a lesson, Joe Terranova of Virtus Investment Partners said Monday on CNBC.

"I think Apple has become a casino. I think it's problematic," he said. "I think it's reflective of the way we think in the markets. I think algos are here to stay. The machines are faster than all of you, and you can't trade that fast anymore."

As part of a larger discussion on "Fast Money" with Seabreeze Partners President Doug Kass and his past bullishness on Apple, Terranova argued that the stock was one which large players, not individual investors, could trade sucessfully. (Read More: 'Trade, Don't Invest in Apple': Doug Kass)

"They could remove that fast element of trading from Apple itself by using the tremendous amount of cash that they have by either buying back stock, rolling out a special dividend," he said. "They have not done enough in terms of their capital allocation strategy to teach the market a lesson that this is more an investment than it is a trade."