It Could Get Hairy Before 'Cliff' Deal: Greenspan 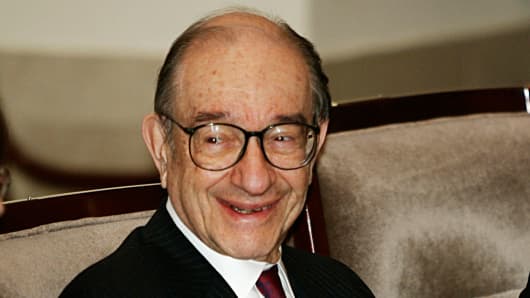 The U.S. will likely avoid the "fiscal cliff" but it could be a bit hairy before politicians reach an agreement, former Federal Reserve Chairman Alan Greenspan told CNBC's "Closing Bell" on Tuesday.

"The best possible outcome is to take something like Simpson-Bowles as it came out originally and work off that," he said, of a deal to avoid the automatic tax hikes and spending cuts that go into effect at the end of the year.

But he said that reaching a final agreement won't be an easy process, since the president believes he has a mandate following the election while House Republicans believe they, too, have a mandate.

"I'm not at altogether clear how much control (Speaker) Boehner has over the overall caucus," Greenspan said. "At the end of the day it will all work out but it's going to be a bit hairy before we get there."

(Read More: Forget the 'Fiscal Cliff,' Look at These Cliffs.)

Greenspan also warned there could be significant implications for markets if a deal is not reached.

A day ahead of the Federal Reserve's interest rate decision on Wednesday, Greenspan also said that the Fed stimulus hasn't had much of a major effect. They've created a very large expansion of the balance sheet which has ended up as reserves at the banks.

"Unless and until it is re-lent it will not have an impact on the economy," he said. "The Fed is not as big a player as most people think in this context."

Greenspan also believes that the housing market has bottomed. "Housing is the only area of the economy that is moving up on its own," he said.