Lindsey: Obama Moves Goal Posts ‘Out of the Ballpark’ 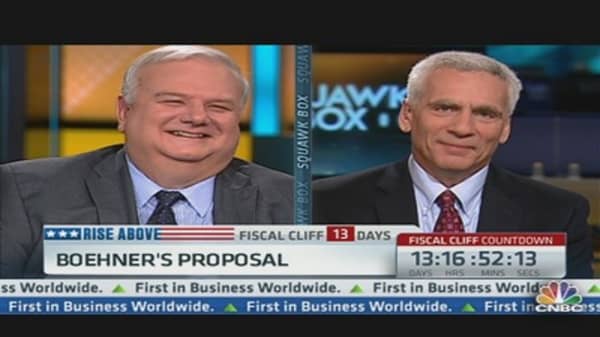 "The president campaigned on tax increases for [households] over $250,000 for a total of $970 billion [in new revenue]," Lindsey told CNBC's "Squawk Box" on Tuesday. "So now we're at $1.2 trillion … From what he campaigned on, he's is still moving the goal posts away from a compromise."

On Monday, Obama offered to again lower his call for new revenues, but said he'd increase to $400,000 the threshold for tax hikes on the wealthy, a source familiar with the negotiations told CNBC. The latest Republican proposal goes to a million. The president had said until now that $250,000 was his hard and fast number.(Read More: US 'Fiscal Cliff' Deal Closer, but a Divide Remains.)

The president's new proposal also included a two-year boost in the debt limit, a package of spending cuts that moves closer to Boehner's plan, and the use of a different formula to calculate cost-of-living increases for Social Security recipients called "chained Consumer Price Index."

Lindsey, a former National Economic Council director under President George W. Bush, welcomed the president's overture to adjust the CPI calculation. "We need to have correct indexing for Social Security. … The one we have now exaggerates the price increase."

Lindsey acknowledges that making that change would decrease the cost-of-living bumps that the elderly poor receive. He said that once an agreement is reached on the new price index, then discussions can move to whether benefits should be increased to make up for that change.