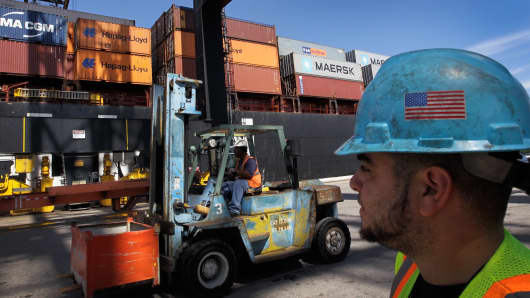 First came the "Fiscal Cliff." Now, get ready for the "Container Cliff."

The threat of a longshoremen's strike that could close 15 ports from Massachusetts to Texas—including the port of New York and New Jersey—has shipping industry leaders, manufacturers and retailers warning of a "devastating blow" to the supply chain.

Like the fiscal cliff in Washington, the deadline for an agreement between the International Longshoremen's Association (ILA) and employers represented by the U.S. Marine Alliance is approaching fast—Dec. 29 to be exact.

Negotiations broke off earlier this week after management said they want to cap "container royalties," which are payments made to longshoremen based on the weight of the container cargo.

With no new talks scheduled, ,14,500 workers at the 15 ports—including the 4,000 dockworkers in New York and New Jersey—could walk off the job on Dec. 30. The last time there was an East Coast longshoremen's strike was back in 1977.

The New York-New Jersey port is the second largest port to handle manufactured goods from China and is the largest port on the East Coast.

"The New York and New Jersey port handles approximately 10 percent of China imports, 69 percent of Israeli imports and 37 percent of Italian imports. The products being imported from these countries are furniture, plastics, apparel, beverages and chemicals. In 2011, the New York-New Jersey ports handled $208 billion in cargo- the most on the East Coast.

"We understand the impact of a strike and we know the implications but the ILA is obligated to represent their members and they work under extremely dangerous circumstances." said James McNamara, spokesman for the International Longshoremen's Association.

"Fifteen people died this year alone," he added. "They were crushed by containers, run-over by forklifts. There isn't anything scheduled for talks but that doesn't mean they can't resume. We are waiting and anxious to hear from the federal mediator George Collins."

Shipping executives are keeping a close eye on these negotiations.

"The port strike would be really bad for the business, not just for shipping but also for the retail / wholesale business." explained Gerry Wang, CEO of Seaspan Corporation (SSW), "Cargo will have to be redirected to other ports on the east coast or even via west coast by train. If the strike is perceived long term, the shipping lines will change their service routes to avoid the port call."

If routes were shifted to avoid the port call, DVB Bank's head of shipping finance and member of its managing board of directors, Dagfinn Lunde said this diversion of cargo could have negative consequences for the ports.

"The New Jersey/ New York port is an extremely important harbor," he said. "But if there is a strike and it is prolonged, cargo will be directed to the south or the west coast and it can be permanently re-routed."

This possible disruption in the supply chain is being called the "container cliff" by the National Retail Federation. The NRF is warning the strike is not only costly for their members but will take time for the supply chain to recover.

"In 2002 with the West Coast lock out cost us a billion a day for the United States and took six months to recover. In some cases cargo that was re-routed during the strike has never come back to the port." said Jonathan Gold, Vice President for Supply Chain and Customs Policy for the National Retail Federation. "Typically what we hear from our retailers for every day of a shutdown, it takes two to three days to clear. Millions of containers will be impacted if this strike happens."

Retailers like Wal-Mart, Target, Best Buy are just some that could experience such product delays.

"Roughly two million total cars were imported this year with around 40% coming through the East coast." said Jesse Toprak, analyst for TrueCar.com.

"There is also the potential part simpact of this strike," Toprak said. "However, Obama can use the cool off and delay a potential strike by 80 days and it's likely that at least a part of the shipments will be diverted to alternative ports. That will mean extra shipping costs and delayed delivery times but I don't anticipate any major actual product shortages due to healthy inventory levels for several months."

But retailers are not as optimistic. "They (retailers) are very concerned for January because a strike would mean a delay with their Spring and Summer shipments. Everything from apparel to home goods to even patio furniture wouldbe held up." explained Gold. 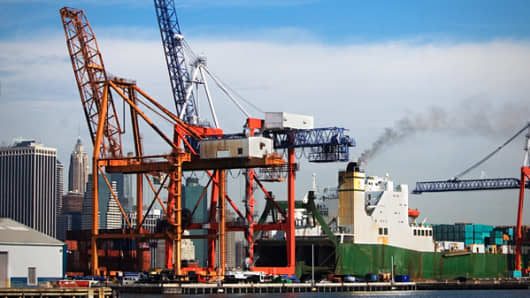 "These retailers will also face unanticipated costs. The ocean carriers will charge a $1,000 congestion fee per container for every day they are at sea. This extra charge will hit their bottom line. The ripple effect goes beyond the retailers. The truck drivers who get paid by transporting the containers, will not get paid because there is nothing to transport."

"But if the parties don't come to a resolution, we are urging President Obama to step in to invoke provisions of the Taft-Hartley Act, which would essentially keep commerce flowing along the East and Gulf coasts," Timmons said. "Our economy is fragile and a port strike would simply put the manufacturing supply chains and exports a trisk driving down further our economic situation."

A potential strike would also impact the small receivers of cargo who normally borrow money to cover the costs of goods they intend to sell in their stores.

"So if goods are in transit, a delay of any sort could have terrible consequences as banks and lenders call on the unpaid notes. They will want to get paid even if the items are still at sea." said one small businessman who did not want their name mentioned.

With tens of millions a week in personal income and tens of millions in economic output, being generated by the ports a week according to an analysis by the Port Authority of New York and New Jersey, Gold stressed it is critical for both sides to rise above and get back to the negotiation table, "Having the ports open and running is critical for importers and exporters and the economy as a whole."