Gold Can Still Break Through $2,000: Analysts

The price of gold may have come under increasing pressure in past weeks with concerns that the Federal Reserve's loose monetary policy may be coming to an end, but analysts have told CNBC that the precious metal can still break through the $2,000 mark in the long term. 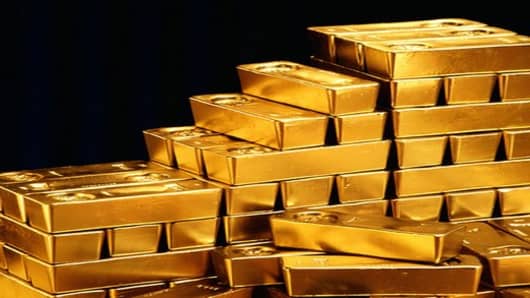 "We're in a very good situation. QE (quantitative easing) is going to go for six to twelve months. They are talking about $500 billion to $1 trillion more in the system," Eugen Weinberg, head of commodity research at Commerzbank told CNBC Monday.

Record low interest rates by central banks around the globe have resulted in negative real interest rates — when allowing for inflation. Traditionally gold has an inverse relationship to interest rates and is used as a hedge against inflation, which can occur as a result of monetary stimulus.

"So a very positive environment for gold," Weinberg said. "But for now the demand for safe haven is not there so probably even the professional buyers are going to be keeping off the market. But longer term we forecast the prices to rise above $2,000."

The precious metal has remained a talking point in recent weeks as many now feel the spot price has stalled below $1,700. Inflation has yet to materialize and a slight change in rhetoric has emerged from central bankers.

The Federal Reserve announced its last QE program last month, but minutes from that meeting show that several Fed officials thought it would be appropriate to slow or stop asset purchases well before the end of 2013, citing concerns about financial stability and the size of the balance sheet.

The suggestion of an end to its asset buybacks caused the price of gold to fall more than 1 percent.

"If the economy performs well in 2013, the committee will be in a position to think about going on pause with its balance sheet policy, St. Louis Fed President James Bullard told CNBC on Friday.

Weinberg said that commodities in general are set for a good 2013 as the world continues to grow, but other analysts aren't as convinced.

"I think that the commodity cycle is broken," Hans Redeker, head of global currency strategy at Morgan Stanley told CNBC Monday, adding that he believes peaks in prices for commodities have already occurred.

(Read More: Gold May Be Down but Bulls Aren't Counting It Out)

"With other central banks also flooding financial markets with cheap liquidity (ECB, Bank of Japan, and potentially more from the Bank of England with new governor in 2013), the global monetary stance continues to be supportive of gold in particular," he told CNBC.com.

"While cyclical growth pick-ups may cause short-term pauses in debasement policies and the gold price rally, until real debt burdens are reduced, gold should remain in a structural bull market."