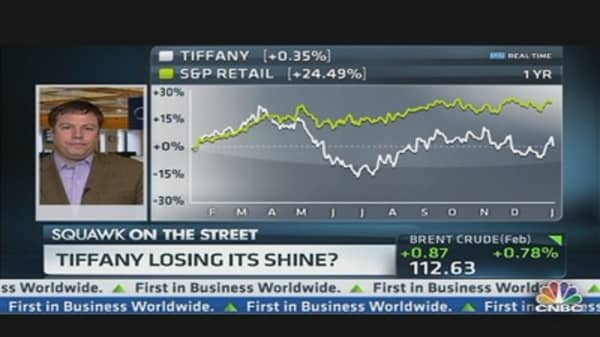 Tiffany's announcement that sales during the crucial holiday period were unchanged from last year sent the stock lower on Thursday, but one analyst said the stock has bottomed and that it could be "poised to bounce pretty nicely."

The luxury jeweler reported flat same-store sales during November and December and said fiscal-year earnings will be towards the low end of its prior range of $3.20 to $3.40 per share, compared to Street estimates of $3.26 a share.

The lackluster numbers are especially crucial because the holiday period can account for nearly half of the jewelers' profit and one-third of annual sales.

Despite the disappointing update, Brian Nagel, a senior analyst at Oppenheimer, told CNBC's "Squawk on the Street" that he has an "outperform" rating and a $75 price target on the company's shares. 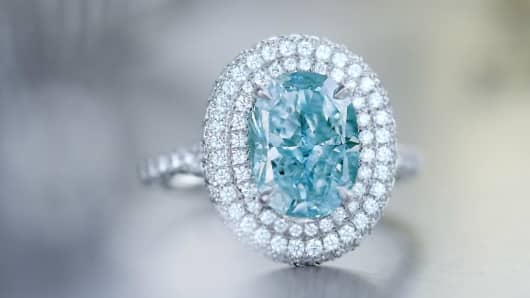 "Cut through the noise, and I think there are a number of positives out there on the horizon for Tiffany as we look out into 2013," Nagel said. "These include easier sales comparisons, easing input prices."

The company's sales disappointment comes amid a backdrop of a "decent amount" of luxury demand, Nagel added.

"My view, and I've said this for a while now, I think Tiffany is suffering through a fashion miss," he said. "I spend a lot of time in their stores and I look at some of their lower-end product, which is still high priced, and I don't think it's keeping up from a fashion standpoint with some of the other up-and-coming jewelry brands, such as a David Yurman. "

Nagel said he was encouraged that Tiffany is now recognizing that it needs "to do something to pump life into that lower-end business." But Nagel thinks problem is fixable and once the company solves it, he forecasts that investors will see "sales improve rather quickly."

"I recognize all the issues with Tiffany," he said. "The point I'm making is that a lot of this is priced into the stock here, and I look at the stock here at $58, $59. It's basically at a valuation bottom. It's kind of again at the low end of its trading range so I think it's poised here, if we get some improvement of the issues we've been discussing, it's poised to bounce pretty nicely."

Brian Nagel does not own Tiffany shares.