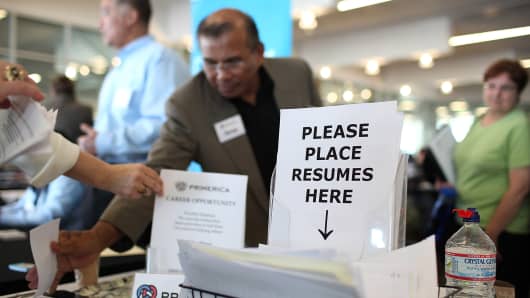 World unemployment could top record levels this year and continue rising until 2017, the International Labour Organization (ILO) said on Tuesday in its annual employment report.

2009 currently stands as the worst recorded year for world unemployment, with 198 million people across the globe without work.

In its 2013 Global Employment Trends report, the ILO forecasts unemployment numbers will rise by 5.1 million in 2013 to reach 202 million, topping 2009's record.

The report also predicts unemployment will rise further in 2014 to reach 205 million.

"Unemployment remains as dire as it was during the crisis in 2009," Ekkehard Ernst, chief of the employment trends unit at the ILO, which wrote the report, told CNBC.

While the crisis may have originated in the developed world, the report noted that 75 percent of 2012's newly unemployed came from outside it, with East Asia, South Asia and Sub-Saharan Africa being the worst affected.

Ernst attributed this to the "spillover effect" of weak growth in advanced economies, and in particular, the recession in Europe.

"The main transmission mechanism of global spillovers has been through international trade, but regions such as Latin America and the Caribbean have also suffered from increased volatility of international capital flows," the report said.

It also blamed incoherence between monetary and fiscal policies and a "piecemeal approach to financial sector and sovereign debt problems, in particular in the euro area."

"The indecision of policy makers in several countries has led to uncertainty about future conditions, and reinforced corporate tendencies to increase cash holdings or pay dividends, rather than expand capacity and hire new workers," the report said.

Ernst added that labor markets can lag other economic indicators, meaning they might not reflect recent upturns in the world economy.

"Labor markets reflect what has happened in the last year… it takes some time for improvement in output to be reflected," Ernst said.

In addition, the ILO is recording rising numbers of people who choose not to search for jobs because they think the situation is hopeless. These people, officially classified as discouraged workers, may choose instead to rely on a partner's earnings or claim welfare benefits, if available.

"The labor market situation has been so bad for so long, discouragement has grown out of proportion," he said.

Despite the gloomy forecast from ILO, some people see a turnaround for the global economy. Pimco CEO and co-CIO Mohamed El-Erian said the world economy could be nearing the end of its "new normal" of high unemployment and slow growth.

"We said in 2009: three to five years," El-Erian told CNBC on Thursday, referring to how long the phenomenon of "new normal" might last. El-Erian coined the term in 2009.