Behind the Wheel, Putting the Tesla to the Test 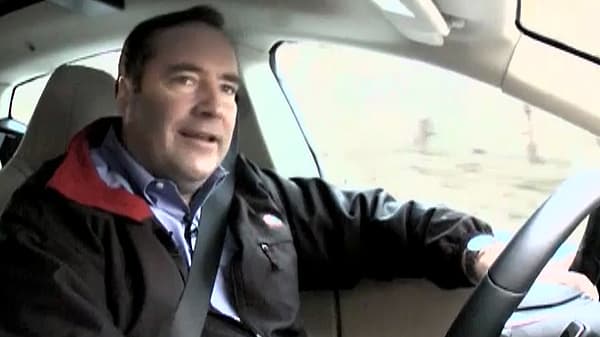 CNBC's Phil LeBeau on Tuesday did a one-day test drive of the Tesla Model S from Washington, D.C., to a suburb just outside Boston. He is not the first, nor will he be the last to recreate the same test drive that led to a very public spat between New York Times reporter John Broder and Tesla CEO Elon Musk.

The big questions everyone wanted to know were: Would he make it to Boston? Was he worried?

"The Model S delivered what @elonmusk promised. A ride to make you re-think going electric," he Tweeted after completing the journey.

Here are Phil's dispatches from the road: 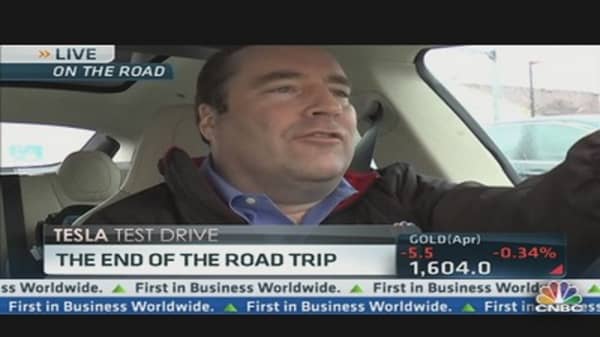 This is a car that you can drive over long distances," he said, "but you have to manage where you're driving and how long you're driving in order to match what the expectation is in terms of battery power."

1:40 p.m. ET: After commenting on "range anxiety" in his last update, Phil put those concerns to rest at the Milford, CT charging station. If you know how far you're going, the car monitors how many more miles you have left. "There shouldn't be range anxiety if you know exactly how far you're going," Phil said. He also said that he'll be charging the car for about 45 minutes before he heads off on the last leg of the drive up to Boston. 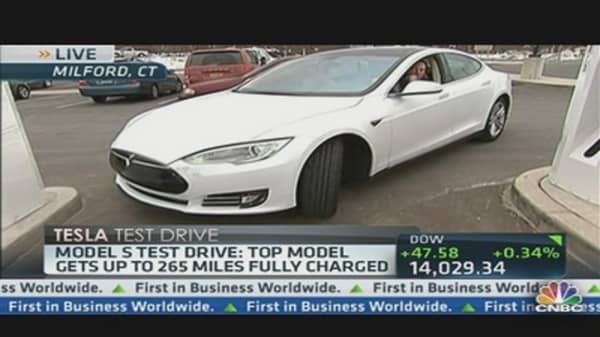 11:14 a.m. ET: Phil filed this report halfway between Washington, D.C., and Boston. He's had two key observations. First, you have a bit of "range anxiety" when you get into the vehicle because you know how far you need to go and how far it can go. The other is that as you accelerate the response is immediate so you can develop a bit of "lead foot" if you aren't careful.

9:48 a.m. ET: Phil filed a live report on "Squawk on the Street" while driving shortly after he left the Tesla charging station in Newark, Del. (Yep, he's hands free!). He was just getting on the New Jersey Turnpike. 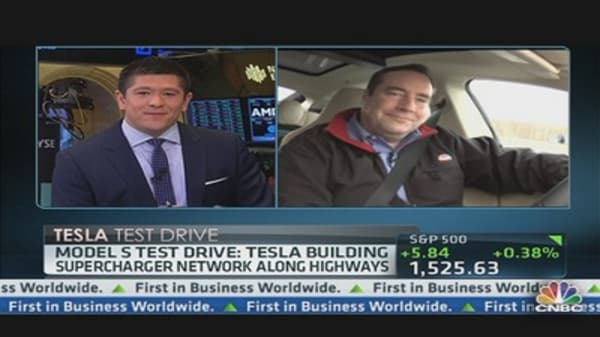 The next stop is Milford, Conn., about 185 miles away at the time of this update. That's where the next Tesla charging station is located.

8:28 a.m. ET: Phil pulled the Model S into Newark, Del., to plug the car into the Tesla charging stations there, which are part of the company's Supercharger Network.

His first impressions on the drive: "I'll be honest, it took me a while to get used to all the information, but once I did, the instrument panel was no more distracting than the center stack in any other car."' 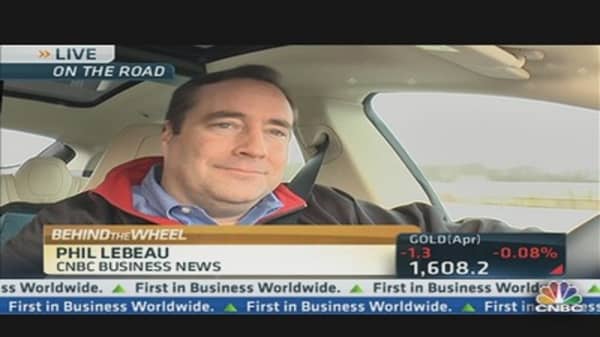 The trip to this point was 95 miles. The car with an 85 kWh battery has a range of 265 miles from full charge, so Phil made it with plenty to spare.

Phil said the more he accelerated the more juice he used. "If you are driving on cruise control and moderating your speed, the battery life and miles left decreases at a steadier, more gradual rate," he said.

The charging was expected to take an hour to "top off the tank," if you will, with enough power for the next leg of the test drive to Milford, Conn.

This is the part of the trip that's sparked the "he said, he said" controversy between Broder and Musk. 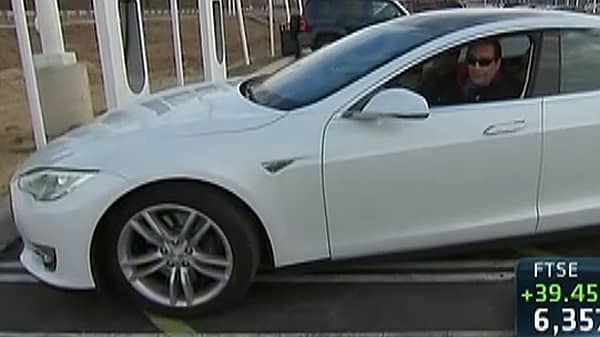 6:11 a.m. ET: Phil started his journey on "Squawk Box," pulling away from the curb in downtown Washington, D.C.

Next stop: Newark, Del., and a Tesla charge station there. Then it's onto Connecticut and eventually a suburb outside of Boston.

Phil said when he left Washington: "Immediately two things stood out — the instant feedback you get from the Model S and a tendency to constantly look at the range and battery power left."

He described the instrument panel on the center counsel as "basically a large iPad. It gives you as much, or as little information as your want. Navigation, energy use, car controls, infotainment, etcetera." 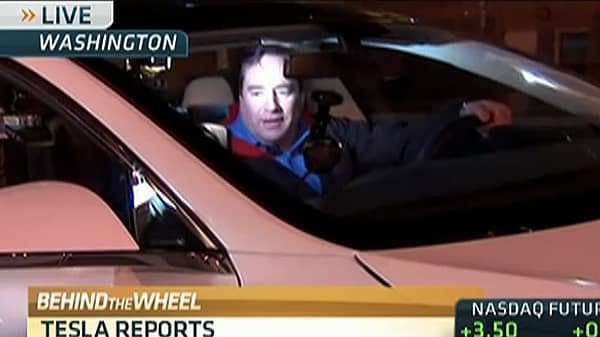 (Watch: Highlights from the Road)

So, it's worth noting that if you haven't followed the back and forth between the NYT's Broder and Telsa's Musk, it's worth going back on CNBC.com and reading what both men wrote about Broder's test Drive of the Model S.

Whether you believe Broder or Musk, one thing is clear: This is a watershed year for Tesla and the Model S.

It's one reason Musk responded so vehemently to Broder's article and a picture showing a dead Model S being loaded onto a flatbed and being towed away. 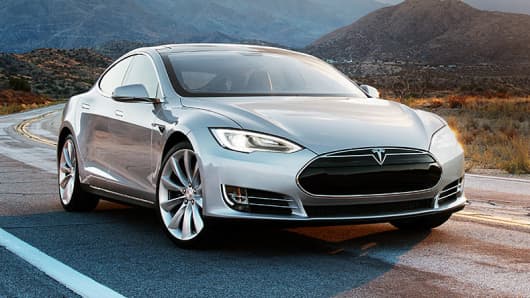 Musk believes Broder paints the Model S as a flawed and ultimately impractical car. That is the last thing Tesla needs in a year when it is expected to finally post a profitable quarter and make the Model S more than just a niche car.

Why is this such a critical year for Tesla?

I recently talked with a respected veteran auto analyst about Tesla. The analyst does not cover Tesla, but he's watched the firm closely. I asked him for his take on Tesla. "If they can get up to speed this year and the Model S takes off, watch out. Tesla will turn heads," he said.

Sure, there are a lot of unknowns.

Can the company keep costs in check while ramping up production of the Model S?

Once thousands of the Model S models hit the road, will there be reliability issues?

Behind all those questions is a skepticism in the U.S. that electric vehicles will ever become viable, every day cars you see in your neighborhood. I hear it on a regular basis. Just a few days ago when I told a friend I was making this test drive he said, "Come on, how many people are really ever going to buy an electric car." Implicit in his comment was the suggestion EV's will be limited to a few wealthy or "greenie" types.

Musk believes otherwise. For him, this is the start of the electric car revolution. The start of EV's popping up in mass numbers all around the U.S., and eventually around the world. It's a bold vision, and you may think he's nuts. Believe me, there are plenty of people in the auto industry who think a pure electric car will never work. There are also plenty who are scared to death Musk and Tesla are right.

Time will tell if 2013 is the year Musk and Tesla go from being a fledgling auto maker and become a car company with the staying power.

And right now, whether or not that happens depends largely on the Model S. Let's hit the road.