You Go Girl! Time to 'Lean In' on Finances: Study 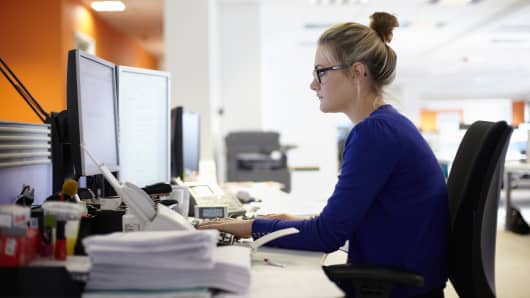 Women need to "lean in" financially as well as professionally to overcome an inclination to avoid risk, according to a new report that shows men have more money invested in taxable securities, as well as their 401(k)s, IRAs and savings accounts.

The only accounts where women have higher average balances, the report said, are in relatively low-risk money market funds.

Women's reluctance to take risks, and the potential shortfall they face in retirement, have been a growing concern among policymakers and women's advocates. An opinion survey from Prudential insurance company last year found that while some 70 percent of men are willing to take financial risks, fewer than half of women were.

(Read More: More Women Are Breadwinners, But It's Complicated)

But the new report, released by the online rewards program for savings and debt-management SaveUp.com, is based on actual account balances entered by 20,000 of the site's users during the past month, and provides a remarkably clear and up-to-date snapshot of men's and women's financial habits.

The figures are stark and startling. The average man with a savings account had a balance of nearly twice as much as the average woman, and is taking an even greater advantage of high-yield tax-deferred instruments: Men's average IRA balance was 72 percent more than the average woman's, and they have 30 percent more in taxable investments.

"Insufficient market exposure is going to cause a compounding gap over time," said Priya Haji, CEO and co-founder of SaveUp, who follows Facebook COO Sheryl Sandberg's book in advising women to "lean in" on their professional life.

The one category in which women outdo men is staying out of debt, with the average American woman owing $34,645, versus the average man's $42,842. A large part of the American male's debt load, the study suggests, goes toward his car. Men carry 32.3 percent more in car-loan debt than women. Women also lead men in student loans, a promising sign that women are investing more in their futures.

(Read More: Nature or Nurture? Why Women Don't Save for Retirement)

But while it's a good thing that women are less encumbered, Haji said, their unwillingness to take on debt is just more of an indicator of a timidity that manifests itself in many of life's pursuits. "I'm not saying there aren't women who drive racecars or skydive. There are," she said. "But it's broader than just money. This is an aspect of our nature."

Women need to make a concerted effort to overcome this natural tendency by dedicating some portion of their income to investing in the market, and to seek out financial help from professional advisers.

The disparity in the sexes' respective accounts may also come from differences that are less innate. In short, women are not paid as much as men. Better investing and more education alone, Haji said, "won't offset lower salaries. The compounded effect of not negotiating for higher salaries, and regular increases over a career, is also feeding into the savings differential."

Women's aggregate pay is complicated, too, by childbearing and child care, which can take women out of corporate jobs during a time when their male counterparts are contributing steadily to employer-sponsored retirement accounts. (It's not clear from the SaveUp numbers how many female users included in the study are married, and therefore have some access to the higher average balances owned by men.)

"Leaning in," succeeding at work at home also be a drain on funds that women might otherwise invest. A recent survey sponsored by Working Mother magazine and the Chase Slate card showed that while working mothers look forward to a raise in 2013, they are more likely to use the extra money to take care of immediate financial problems. The survey's respondents said paying off debt was second only to balancing work and family among working moms' concerns.

"Younger women are not thinking about retirement," said Jennifer Owens, editor-in-chief of Working Mother. "For many of them, paying for child care is a bigger concern at this point."