Stocks closed well off their lows Friday, but the S&P 500 and Nasdaq still logged their worst one-week declines this year, pressured by a disappointing March unemployment report in addition to ongoing jitters over North Korea.

The Dow Jones Industrial Average declined 40.86 points to close at 14,565.25, cutting most of its losses after being down more than 170 points at its session low. American Express and Cisco led the blue-chip laggards, while Boeing gained. The Dow posted its worst week since February and logged its second weekly decline in the last seven weeks.

The S&P 500 slipped 6.70 points to finish at 1,553.28. Major averages have struggled for direction since the S&P 500 pierced through its 2007 closing high last week. The index has zigzagged between gains and losses for the 13th-consecutive session.

The CBOE Volatility Index (VIX), widely considered the best gauge of fear in the market, ended unchanged near 14.

For the week, the Dow erased a negligible 0.09 percent, the S&P 500 dropped 1.01 percent, and the Nasdaq tumbled 1.95 percent. Hewlett-Packard was the worst weekly performer on the Dow, while UnitedHealth soared.

Among the key S&P sectors, techs slumped for the week, while telecoms rallied. 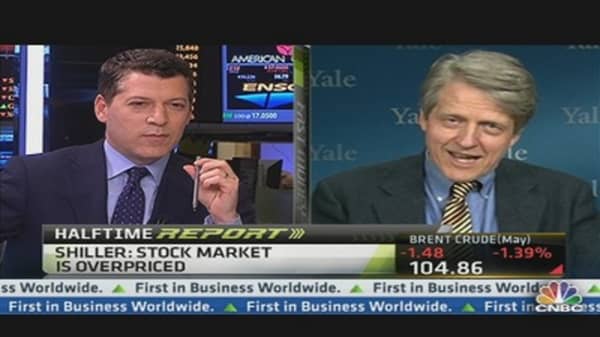 U.S. employers hired at the slowest pace in nine months in March, adding just 88,000, while the unemployment rate notched lower to 7.6 percent, largely due to people dropping out of the work force, according to the Labor Department. The unemployment rate is the lowest since December 2008, while the labor force participation rate is at the lowest since 1979. Analysts polled by Reuters had expected a gain of 200,000.

"This jobs number is going to have to revise GDP lower—at the end of the day, if people aren't making money, they're not spending. So this number has huge ramifications," said Alan Valdes, director of floor operations at DME Securities. "More striking is the fact that this may be the new norm."

Adding to fears, geopolitical tensions remained in focus after North Korea placed two of its intermediate range missiles on mobile launchers and hid them on the east coast of the country, according to South Korean media. In addition, North Korea asked several foreign embassies including Russia to consider evacuating staff from Pyongyang because of increasing tension.

"The situation in North Korea is escalating – and investors are nervous because it's not just chatter anymore," said Creatura. "We're going to be stuck with focusing on national and geopolitical events until earnings season comes and we get more granular information."

But Japan's benchmark Nikkei index continued its upward momentum after the Bank of Japan launched a $1.4 trillion stimulus program.

(Read More: Nikkei Erupts and This Time It May Be Different) 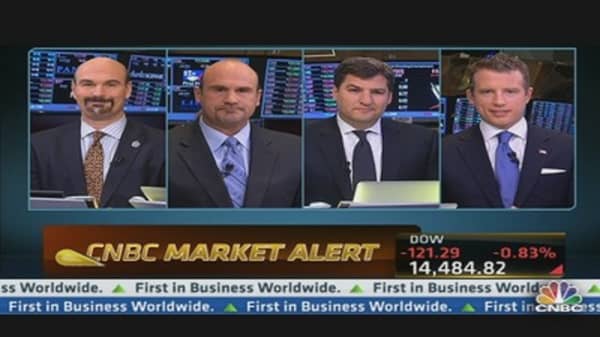 First-quarter earnings season is scheduled to kick off next week with results from aluminum producer Alcoa on Monday after the closing bell. S&P 500 earnings are expected to have increased just 1.6 percent from a year ago, according to the latest data from Thomson Reuters, down from 4.3 percent forecast in January.

Facebook gained a day after the company unveiled its new software for Android devices called 'Home,' which will be deeply integrated with Google's Android operating system. The social-networking giant also showcased the HTC First, a smartphone that will come pre-installed with Facebook's new 'Home' software. In addition, Argus Research upgraded its rating on the company to "buy" from "hold."

Boeing turned higher after the company said it plans to make a test flight later this afternoon with its 787 Dreamliner jet after more than two months on the ground.

Also on the economic front, the U.S. trade gap narrowed unexpectedly to $43 billion in February, from an unrevised $44.5 billion in January, as crude oil imports fell to their lowest level since March 1996 and overall exports increased slightly, according to the Commerce Department. Economists surveyed by Reuters expected the gap to widen to $44.6 billion.

And consumer credit rose by $18.14 billion in February to $2.799 trillion and January was revised to show a smaller jump than previously expected, according to the Federal Reserve.

On Tap Next Week: