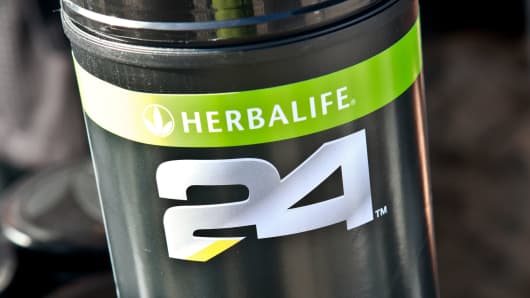 Herbalife on Monday delivered its 17th straight earnings beat and raised its full-year outlook, but its second-quarter guidance fell short of expectations.

Shares in the multilevel marketer of weight-loss shakes and skin lotions wavered after the report. (Click here for the latest stock quote.)

Excluding items, earnings rose to $1.27 per share from 88 cents a share in the year-earlier period, while revenue improved 14 percent to $1.10 billion from $964 million a year ago.

Analysts had expected the company to report earnings excluding items of $1.06 a share on $1.12 billion in revenue, according to a consensus estimate from Thomson Reuters.

However, its second-quarter outlook fell short: Herbalife expects earnings between $1.14 to $1.18 a share, compared with analysts' expectation of $1.26 a share. Herbalife said it expects revenue growth of 11 percent to 13 percent, lower than the 14 percent analysts currently expect.

The company said expenses incurred responding to attacks on the company's business model reduced earnings by 7 cents per share. That was a reference to allegations by high-profile investor Bill Ackman, who in December argued that Herbalife is a pyramid scheme. His activist hedge fund Pershing Square Capital took a billion-dollar short position on its stock.

That was followed by public sniping between Ackman and Herbalife investor Carl Icahn, who increased his stake in the company. At last week's shareholder meeting, two Icahn-backed board members were elected.

Earlier this month, KPMG was forced to resign as auditor for Herbalife after a senior partner was discovered to be at the center of an insider trading probe and was fired by the accounting firm.

The company also disclosed in February that its operations have been the subject of an inquiry by the U.S. Securities and Exchange Commission's Division of Enforcement since late last year.