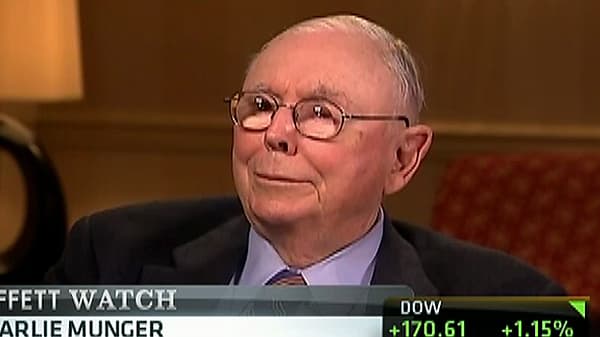 "What Cyprus demonstrates is an old truth: You can't trust bankers to govern themselves," Munger told CNBC. "A banker who is allowed to borrow money at X and loan it out at X plus Y will just go crazy and do too much of it if the civilization doesn't have rules that prevent it."

Seeing parallels between Cyprus and Iceland, Munger called it "stark, raving mad" and added that "the bankers would have been doing even more if it hadn't blown up. I do not think you can trust bankers to control themselves. They are like heroin addicts."

(Related: Buffett on Fed, IBM and His First Tweet)

"I think the long term investor is not too much affected by things like the flash crash. That said, I think it is very stupid to allow a system to evolve where half of the trading is a bunch of short term people trying to get information one millionth of a nanosecond ahead of somebody else," Munger said.

(Related: @WarrenBuffett Is 'in the House')

Munger also said China is better than the U.S. at nipping crazy booms in the bud. "They're willing to step in and intervene. They're willing to take the punch bowl away right in the middle of the party," he said. "I like people like that." 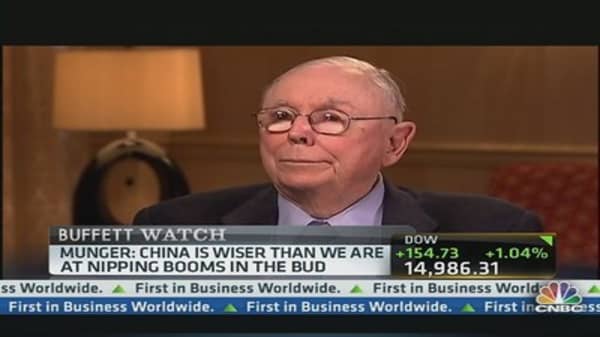 Asked how what Fed chairman Ben Bernanke is doing to reflate asset prices differs from what Greenspan did, Munger told CNBC that Bernanke's policies are an antidote to crisis. "To some extent Greenspan did it to make the boom a little bigger," he said.

But Munger said it was to Greenspan's credit that he recognizes that maybe he was wrong "with his kind of extreme free market" approach. "'Let it run baby, let it run,' I think that was wrong," Munger said.

He also weighed in on the boom and bust in the housing market.

"Partly there was a time you felt foolish you didn't buy a house because you weren't making all the money everyone else was making, so it was a typical crazy boom," he said. "Now people have learned house prices can go down as well as up."

— By CNBC's Paul Toscano. Follow him on Twitter and get the latest stories from "Squawk on the Street" @ToscanoPaul