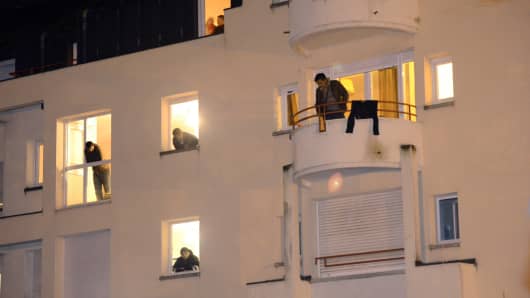 The occupiers staked their claim to the building with pizza.

When the first of 16 families entered a vacant four-storey office block in Paris one night last December, they placed repeated food orders so the neighbors could see from the comings-and-goings of delivery men that the address was occupied. Under French law, witness accounts of residency make eviction harder.

But it was their next act that really had the building's owner shaking his head in disbelief.

"What amazed me was when they invited in the housing minister a few days later," said Spanish property developer Ignacio Lasa Georgas, who has temporarily lost control of his 7- million-euro ($9 million) office block between the Gare du Nord and Gare de l'Est railway stations.

"And over she came to give them her support."

The squat at Number 2 rue de Valenciennes is both a political battleground and a symbol of France's dysfunctional housing market. Activists helped the families move in to draw attention to how Europe's second biggest economy, which prides itself on its welfare system, is struggling to provide basic shelter for many of its 65 million citizens. The problem is not unique to France, but the reasons for it are both aggravated by, and feed into, the country's wider economic woes.

House prices started to rise in 2000. Spurred by a growing population and fragmenting households as well as cheap credit, the average house price in France has defied recession, increasing more from the turn of the century than in countries such as Britain and the United States. Government data show the cost of a home in France has outrun rises in household incomes by 70 percent; houses are now at their costliest compared to disposable incomes since the 1930s.

The housing shortage is further fueled by long-standing policies to protect tenants that discourage many owners from putting properties up for rent. Housing experts say as many as 7 percent of all apartments in Paris are vacant.

The red tape that clogs up bids for planning permission, as well as a steadily growing list of regulations on everything from safety to parking spaces, has also discouraged new building. Strict rules on building figure prominently in the total 400,000 regulations in France's law books. In Le Mans, a city famed for its motor races, plans for a new school have hit trouble because authorities are insisting it be earthquake-proofed - despite a government report stating there has never been any evidence of seismic activity in the region.

The shortage is plain on the streets of the capital. An early morning walk reveals huddles of cardboard and blankets in doorways, the makeshift abodes of some of the 33,000 people estimated by housing charity Abbe Pierre Foundation to be living rough in France - a figure that rises to 274,000 including those in shelters, short-term bedsits and improvised homes on campsites or the like.

That is nearly half the 633,782 people officially recorded as homeless on a single night last year in the United States, a country whose population is almost five times that of France. Exact comparisons are difficult because the countries use different methods, but both measures include people who are living rough or in temporary shelters.

Add to the homeless those living in acute overcrowding or moving from sofa to sofa, and Abbe Pierre, the charity, estimates a total of 3.6 million people in the country lack decent housing. The group puts the shortfall of affordable housing at more than 800,000.

As the problem grows, it is magnified. The families who occupied the offices at rue de Valenciennes are registered as priority cases for social housing, but their requests have gone unanswered for years.

The housing minister who visited them in January said squatting in office blocks is no solution to the crisis. Such occupations, said Cecile Duflot, are "never very legal."

Under French law, squatting is a civil offence and evictions not simple. In France, no one can be evicted in winter. Data on squatting is hard to find, but the latest estimates suggest it has risen sharply in Paris - helped by increasingly organised activists - to around 20,000 squatters from about 3,000 in 2002, said Hans Pruijt of Erasmus University in Rotterdam, who has studied the practice across Europe.

The aim of Duflot's visit "was to show I understand," the Green party MP told Reuters in her office across the River Seine from the squat. "My compassion is for the woman who before that was trying to raise her children in nine square meters of space."