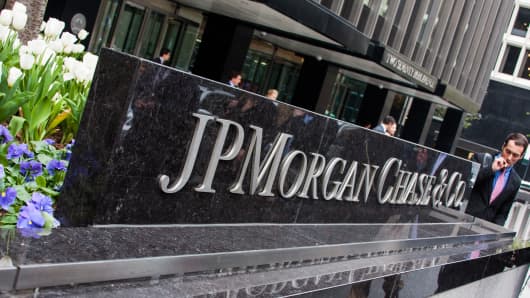 JPMorgan is exiting physical commodities trading, the bank said in a surprise statement on Friday, as Wall Street's role in the trading of raw materials comes under unprecedented political and regulatory pressure.

After spending billions of dollars and five years building the banking world's biggest commodity desk, JPMorgan said it would pursue "strategic alternatives" for its trading assets that stretch from Baltimore to Johor, and a global team dealing in everything from African crude oil to Chilean copper.

The firm will explore "a sale, spinoff or strategic partnership" of the physical business championed by commodities chief Blythe Masters, the architect of JPMorgan's expansion in the sector and one of the most famous women on Wall Street. The bank said it will continue to trade in financial commodities such as derivatives and precious metals.

Pressured by tougher regulation and rising capital levels, JPMorgan joins other banks such as Barclays and Deutsche Bank in a retreat that marks the end of an era in which investment banks across the world rushed to tap into volatile markets during a decade-long price boom.

But JPMorgan is the first big player to exit physical commodities entirely and attention will now turn to Morgan Stanley and Goldman Sachs, which face similar pressures.

Friday's announcement follows a week of intense scrutiny of Wall Street's commodity operations, with U.S. lawmakers questioning whether banks should own warehouses and pipelines, and the U.S. Federal Reserve reviewing a landmark 2003 decision that allowed commercial banks to trade in physical markets.

JPMorgan's own review, which began in February, concluded that the profits from the business were too slight to be worth the risks and costs of dealing with regulators in multiple jurisdictions, according to one person familiar with the matter.

Although the commodity division's $2.4 billion in reported revenue last year surpassed those of long-time rivals Goldman Sachs and Morgan Stanley combined, some have queried its profitability due to the costs of running a huge logistical operation. One analyst estimated that physical trade accounted for half or more of overall commodities revenue.

A sale could help JPMorgan Chief Executive Jamie Dimon make good on his promise to put the bank back on course after a series of costly and embarrassing trading moves and regulatory run-ins, including a potential $410 million settlement over alleged power market manipulation.

But securing a sale may not be straightforward. Several other large energy trading operations are also on the block, at a time when tough new regulations and low volatility have dampened interest in commodity trading. Rival investment banks are unlikely suitors.

Morgan Stanley, which said it had its worst quarter in commodities in decades in the fourth quarter of 2012, has been trying to sell its business since last year. Goldman has looked at divesting its metal warehouse unit Metro since March.

"Where just a few years ago the bulge bracket (banks) were expanding and hiring at a breakneck pace, now retrenchment is the order of the day," said George Stein, managing director of New York-based recruiting firm Commodity Talent.

The news will also bring questions about the future for Britain-born Masters, who started as an intern on JPMorgan's London trading floor two decades ago. After long lagging rivals, she transformed JPMorgan's commodity arm into a global powerhouse in less than five years.

JPMorgan spokesman Brian Marchiony said the bank had "considered many different factors" before deciding to exit the business, "including the impact of potential new rules and regulation."

The announcement came just three days after a powerful Senate banking committee heard from experts who said that metals warehouses owned by Wall Street and other commodities traders were distorting markets and even driving up the cost of aluminum cans for beer and soda. Some said allowing them to trade in physical markets was a risk to the financial system.

"This could be good news for consumers and taxpayers," said Senator Sherrod Brown, member of the Senate Banking Committee.

"Banks should focus on core banking activities," he said.

The Department of Justice and the U.S. Commodity Futures Trading Commission have also both launched probes into metal warehousing. When JPMorgan bought the company in 2010, Henry Bath's warehouses were the second largest in the London Metals Exchange system.

JPMorgan's decision is a sharp and unexpected reversal for a bank that has pushed aggressively into the sector since 2008, when it first inherited a host of power trading assets through its acquisition of Bear Stearns during the financial crisis.

That was followed by the acquisition of RBS Sempra Commodities in 2010, allowing the bank to quickly become the largest commodity business on Wall Street, with a global footprint in oil and one of the biggest metal trade desks. Its staff swelled to 600 people across 10 offices.

The bank initially struggled, however, to integrate the entrepreneurial trading unit, and a number of senior traders left. That same year a bad trade in coal markets lost hundreds of millions of dollars, which Masters called a "rookie error."

But it seemed to have found its footing last year, securing new deals and stemming the exodus of talent.

During its short peak, JPMorgan's global commodity operation was considered the largest on Wall Street, supplying crude oil to the biggest refinery on the East Coast and holding enough electricity contracts to power Indiana's 2.8 million homes. It was one of the 10 largest U.S. natural gas traders.

The tide seemed to turn this year.

Already under pressure in Washington following its $6.2 billion "London Whale" loss on derivatives trades last year, in March it learned that the U.S. Federal Energy Regulatory Commission was preparing to charge its power traders with manipulating markets in the Midwest and California.

The bank has since scaled back its power business and sold off half of its power trading contracts, Reuters reported earlier this week. Earlier this month its longtime global oil trading head Jeff Frase left the bank.

The decision to move out of the raw materials trade comes months after Dimon vowed to resolve multiple government investigations and correct problems that regulators have found.

Big banks are taking a more conciliatory stance in general with regulators who continue to impose new rules more than five years after the start of the financial crisis.

The impact of the decision may be modest for the bank as a whole, analysts have said. JPMorgan shares ended down 0.8 percent at $56.05 on Friday.

Still, getting good value for the commodity business may be tough as the market is already crowded.

Morgan Stanley, facing even tougher regulatory pressure over its vast oil division, has been trying to sell its commodities division without success since last year. It may learn by September whether the Federal Reserve will allow it to keep its business, including the logistics unit TransMontaigne. 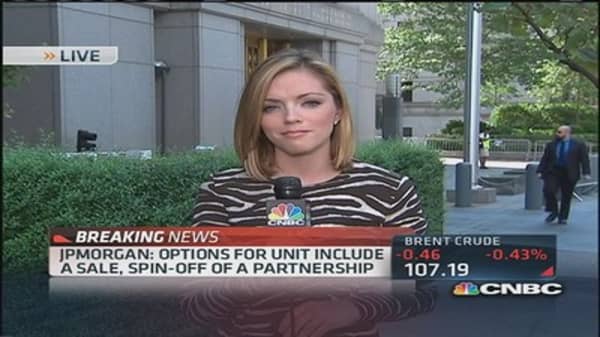 Hetco, the physical trading shop half owned by Hess Corp, is also in the midst of being sold as Hess is split up. And the energy trading unit of Omaha, Nebraska-based Gavilon may also be for sale afterMarubeni Corp excluded it from its takeover of the grains trader this year.

The value of its Henry Bath warehouses, once considered the crown jewel of Sempra, is said to have slumped as the LME prepares to implement tougher rules that are meant to end the lengthy queues that have helped bolster earnings.

"There are questions about the return on capital now," said a senior executive in the warehousing industry. "I don't see many deploying their money."

Industry executives say that there are two types of buyers for these vast, capital-intensive businesses: private equity groups like Carlyle Group, which have recently moved into the space, and sovereign wealth funds like that of Qatar.

But the group could also be a target for one of several merchant traders looking to quickly expand into metals and energy markets.

Freepoint Commodities, a privately owned merchant founded by the original Sempra team, bought back a metals concentrates business from JPMorgan last year. Swiss-based Vitol and Mercuria, two of the world's largest energy traders, have both expanded into metals in the last year.