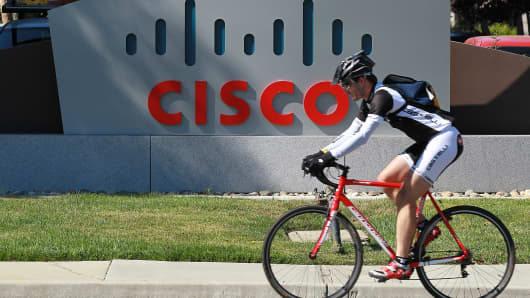 Cisco stock plunged Thursday, a day after it announced plans to lay off 4,000 employees, or 5 percent of its work force. The company said it will take a charge for the restructuring in the fiscal first quarter.

Shares of the world's biggest network equipment maker were down more than 8 percent in premarket trading Thursday. What's the stock doing now? (Click here for the latest quote.)

A Cisco executive, Chris Dedicoat, defended the job cuts Thursday, saying the company had to try to predict where the growth opportunities were and where workers were needed. "We have to make sure we have the right people with the right skill sets in the right place," the chief executive for Europe, Middle East, Africa and Russia told CNBC.

The layoff news came after Cisco reported fiscal fourth-quarter earnings and revenue that edged past analysts' expectations, helped by continued strength in its enterprise business.

Goldman Sachs on Thursday recommended that investors "use the pullback to buy the stock." 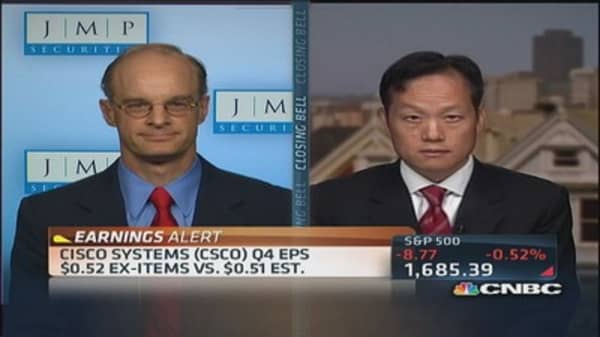 Analysts were expecting earnings of 51 cents per share on revenue of $12.41 billion, according to estimates from Thomson Reuters.

Gross margins for the quarter fell to 59.2 percent from 60.6 percent a year ago.

Erik Suppiger of JMP Securities, which has a "hold" rating on Cisco, told CNBC's "Closing Bell" that he was "hoping to see a little better upside on revenue."

Mark Sue of RBC Capital Markets, which rates the stock "outperform," cited stronger sales execution, faster decision-making and better positioning to gain market share as reasons "the company is much different than it was just a year ago."

Cisco has been trying to use its networking prowess to branch out into a broader range of products and services, in mobile, cloud-computing and video communications. Optimism has reigned lately, with shares climbing 24 percent since mid-May, before the earnings release.

Cisco said Wednesday it expected revenue to grow by 3 percent to 5 percent in the current quarter, and forecast profit in line with Wall Street.

Chief Executive John Chambers said he saw "slow, steady improvement, but not at the pace we want."

Chambers' commentary is closely watched by investors as Cisco is regarded as a strong indicator of the general health of the technology industry because of its broad customer base.