Syria conflict and the oil market: Worst and best scenarios 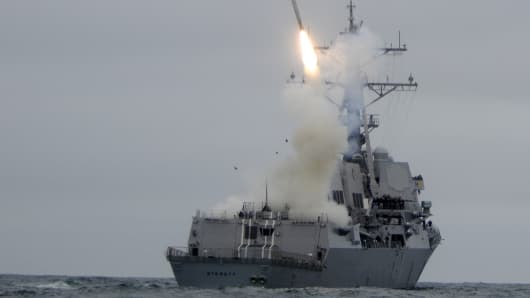 Western military strikes on Syria present a complex set of possible outcomes, and all of them make problems for energy markets to one degree or another. But some scenarios are worse than others.

Despite an abundance of oil supplies—and the fact that Syria is a minor oil producer, at best—the global market for crude has been dominated for a week by worries about the Middle Eastern country. U.S. oil hit a two-year high above $112 on Wednesday, after closing below $104 on Aug. 21, the day that the Syrian military is believed to have used chemical weapons against rebels fighting the regime of President Bashar Assad. Hundreds of civilians died in the attacks. 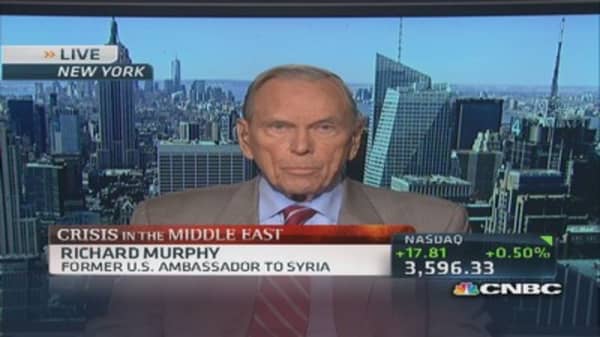 Since then the United States has intensified its naval presence in the region, and increasingly hostile rhetoric has spilled from allied capitals, including Washington, London, Paris and Ankara, Turkey. Given Syria's geographical location and the multitude of countries and non-national actors with interests in Syria's brutal 2½-year-old civil war, market watchers and others are asking themselves, where is this conflict headed?

CNBC asked a group of Middle East, economic and energy experts for their opinions, and came away with possible worst-case and "least bad-case" scenarios.

Several sources agreed that all the worst-case scenarios involve violence spilling over into other countries. And while they disagreed on the likelihood of such an outcome, they all agreed it's entirely possible.

"The X-factor in any strike is the possible retaliation of a dying and unpredictable Assad regime against its neighbors," said Emad Mostaque, a strategist at London-based Noah Capital Markets.

Such a desperation attack on energy infrastructure isn't without precedent: Saddam Hussein ordered Iraq's military to set fire to more than 600 oil wells in Kuwait before retreating from that country during the Gulf War of 1991.

"If Syria feels cornered, they may decide, 'Hey, we've got nothing to lose here, so let's extend this crisis,'" said Mohammed Akacem, professor of economics at Metropolitan State University of Denver.

Assad would have a number of targets to choose from. About 1 percent of the world's global oil production flows through the Turkish port of Ceyhan, which is only three hours from the Syrian border by land, said George Haley, director of the Center for International Industry Competitiveness and a professor at the University of New Haven. A significant portion of Iraq's natural gas also flows through the port. Syria and Turkey, once allies, have traded increasingly heated rhetoric since Syria's civil war began in 2011.

There's also Iraq's northern natural gas pipeline itself. The artery lies close to the Syrian border, and has already been attacked 30 times in 2013, Haley said. Those attacks are believed to have been connected to fighting already taking place in Iraq, but Syria's military has the ability to inflict serious damage on the pipeline.

Mostaque noted that the Assad regime lacks the firepower to carry out a sustained disruption to oil supplies in the region, even if Syria were to strike Saudi Arabia. But if fighting pushed jihadist fighters from the rebel side into Iraq, that could threaten "a significant portion of future global oil production" in the medium term, he said.

The "elevated geopolitical premium" now on the price of oil is partly a reflection of fears that Iran or Saudi Arabia—countries entangled by proxy on opposite sides of Syria's civil war—could get drawn more directly into the conflict, said Eugen Weinberg, head of commodity research at Commerzbank.

Then there's Israel. The Jewish state is not a major player in oil markets, but it could inflame regional conflict if Assad were able to provoke it with missile attacks, said Akacem from Metropolitan State University of Denver. Again, Saddam Hussein tried to do that very thing when Iraq launched missiles at Israel during the Gulf War in 1991.

If it's assumed that a U.S. or allied attack on Syria is inevitable, then probably the least-bad outcome for oil markets would involve a punitive strike on Syrian military installations that then goes unanswered by Assad. Such a scenario would provide political cover to President Barack Obama, who warned this year that chemical attacks marked a line that the United States would not let Syria cross without facing retaliation.

"Less of a nightmare, and more probable, is that [the U.S.] lobs a few missiles and attacks a few military bases. And Obama says a line was crossed and I did what I said I would," Akacem said. "Then everybody goes home."

Another possibility is that Syrian allies act to stop the conflict from escalating. Perhaps counterintuitively, Iran or Russia could step up to help defuse the looming conflict or hold Assad back from retaliating, Haley said.

"It could be that both Iran and Russia come to the conclusion that it's becoming too high a cost to support Assad, especially if they want some sort of peaceful economic coexistence with the West," he said.

Haley noted that Iran in particular would like to get out from underneath Western economic sanctions that have crippled the country and devastated its middle class, which once was the largest in the Middle East. Speaking out against Syria's Assad could, in some small way at least, help the Islamic state mend economic ties with the rest of the world.

On Wednesday, Iran's new president, Hassan Rouhani, posted a message to Twitter saying he and other Iranian offiicals "completely and strongly condemn the use of chemical weapons" in Syria.

Russia, which has already found itself on the losing side, diplomatically and strategically, after Western clashes with Libya and Iraq, could use its influence on Syria to restrain that country and "actually take the lead and come out winning," Haley said.

On the other hand, Russia could also use Western strikes on Syria as a pretext for hiking the fuel prices it charges its Western customers in Europe. Russia is the largest supplier of oil, coal and natural gas to Europe.

Experts who spoke to CNBC disagreed about the likelihood of Iran or Russia acting to suppress a Syrian counterattack. But all indicated that the possible outcomes stemming from U.S.-led strikes are hugely varied and impossible to forecast.

"I think it's just too hard to call," Haley said.