The Governor of Texas announced on Friday that all girls entering the sixth grade in his state must get Merck'snew vaccine, Gardasil, before they can enroll. Gardasil prevents four strains of the sexually-transmitted disease known as HPV which is the leading cause of cervical cancer. It works best when given before becoming sexually active. But the political and social backlash has already begun. Opponents say the vaccine is a good thing, but it should be up to parents and guardians if or when young girls should get the shots (three of them given over the course of six months) which cost nearly $400. Interestingly, Governor Rick Perry's former chief-of-staff is now one of Merck's lobbyists in Texas. Meantime, the Associated Press reports that Washington state will not mandate the vaccine, but will provide it free. The Gardasil battle will be fought at the state and local level. And Merck is reportedly spending millions to try to convince governments to use the vaccine. Billions of dollars are at stake. And competition from GlaxoSmithKline, which is developing a similar vaccine called Cervarix, is looming. The debate doesn't seem to have had any impact on Merck's stock. Analysts and investors are certain--barring any unforeseen negative side-effects--Gardasil will become at least a billion-dollar blockbuster product for Merck. Fourth-quarter sales of the vaccine were higher than the Street was expecting.

Of course, big pharma doesn't just rely on lobbying efforts to sell its wares. The industry spends mightily on direct-to-doctor marketing. But its army of sales reps are encountering new obstacles. Prestigious medical schools including Stanford, Yale and Penn are clamping down on the "swag" and free meals the reps use to try to keep their drugs top-of-mind with docs. Recently, we went to Stanford to see how its new, very restrictive policy is working in practice. It appears to be a burgeoning trend that is already having an impact on pharma marketing.

Check out my on-air report on "Big Pharma Freebies" 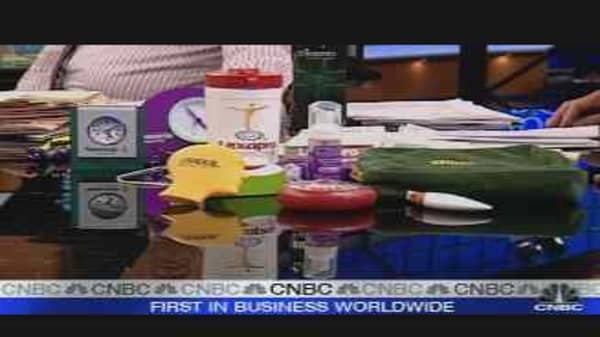 Finally, for the first couple of months the email address to reply to postings on this blog was incorrect. The right one now appears at the bottom of this entry. I apologize if you tried to reach out and had the message bounce back. Feel free to send your comments anytime.