Game Plan for the Week of July 16

There are a number of companies Cramer thinks will report better-than-expected earnings next week, and he recommends getting in beforehand.

Coca-Cola is the ultimate weak dollar play, he said, since KO’s sales are mostly international. The conversion of those euros and yuans and rupees to American dollars should do wonders for the report on Tuesday.

Intel has been on a big run, but Cramer’s call is $27, which means there’s a chance to net a quick point on Tuesday’s earnings. 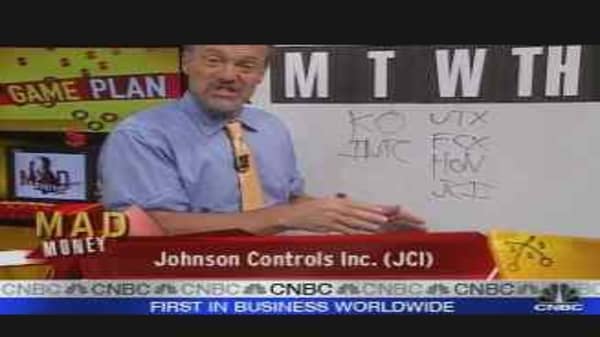 The infrastructure and aerospace businesses of United Technologies should make for a great quarter. UTX reports Wednesday.

Freeport-McMoRan, which mines copper, has been enjoying the rise in prices for that commodity. Cramer says that should lead to astonishing numbers.

CEO David Cote has done a fantastic job turning Honeywell International around, and for that reason Cramer expects a strong report from the company.

Johnson Controls should beat the numbers again. So much so that Cramer thinks the stock could pop nine or 10 points.

The estimates for Schlumberger are so low the company can’t help but beat them, Cramer said. He likes the company enough to recommend it for a long-term investment.

Banking stocks are a different story, though. That’s not to say Cramer doesn’t expect them to post strong numbers. He does. But the reasons are different. He thinks Merrill Lynch, Wells Fargo, JPMorgan Chase, Bank of America and Citigroup are just downright mad about the way the Street has been treating their stocks because of the supposed mortgage troubles. Expect the banks to go out of their way to prove that there are no bad loans to speak of by raising dividends and initiating buybacks. He recommends getting in ahead of the reports.

Bottom Line: Next week, you probably want to bet on better-than-expected earnings in KO, INTC, FCX, UTX, HON, JCI, CAT and SLB. You can also bet the banks are ready to break out and buy ahead of their respective quarters.