The efforts come as Wendy's board is under pressure to sell the company, a process executives said was taking longer than expected because of weakness in the U.S. credit markets. 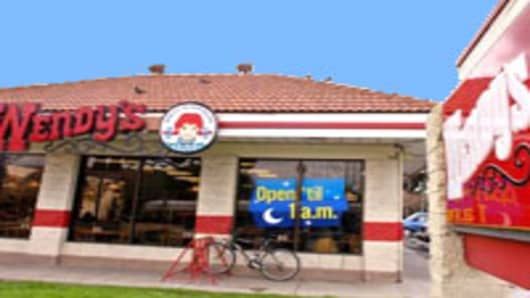 The world's No. 3 hamburger chain, which is struggling with higher food costs, weakened consumer spending and stiff competition from bigger rival McDonald's , outlined 10 initiatives to drive growth and improve returns.

Wendy's plan includes improving sales of bigger, fancier hamburgers, such as the popular new Baconator sandwich, and emphasizing use of fresh, rather than frozen, beef.

The chain also said it hoped to capture more snack sales in the afternoon and late-night hours, something McDonald's has capitalized on in the last year with its popular new chicken Snack Wraps.

Wendy's also plans to expand a new breakfast menu beyond the 850 stores that currently carry it, add more beverage choices and update its lower-priced value menu to reel in younger consumers.

The company also reiterated its commitment to improving profit margins at restaurants, remodeling them and selling more of them to franchisees. Executives said, however, that convincing franchisees to remodel has been more difficult because of uncertainty about the company's future.

Announcement of the plan came the day after Wendy's reported a 0.3 percent decline in sales for the third quarter. Net income also fell, although earnings before restructuring and other expenses rose 55 percent on higher prices and cost cuts.

"While we are encouraged by the margin gain achieved in the cost-cutting program that Wendy's has employed, topline momentum remains elusive," Goldman Sachs analyst Steven Kron said in a research note.

Wendy's has been trying to revitalize profits at its more than 6,600 restaurants for some time, but some investors have grown impatient. A special committee of Wendy's board of directors has been weighing a recapitalization or sale of the company since early this year amid pressure from activist investor Nelson Peltz. Anderson has said in the past that the strategic review was not her idea.

Triarc Companies , Peltz's restaurant company that owns the Arby's chain, has been in discussions to buy Wendy's.

On the conference call, Wendy's Chief Financial Officer Jay Fitzsimmons declined to comment on the strategic review, but said the process was taking longer than expected due to volatility in the credit markets.

Executives said prices on beef, dairy and French fries in the fourth quarter would all be up from a year earlier. The company also said it did not expect same-restaurant sales to accelerate in the current quarter.

Wendy's shares were up 41 cents, or 1.2 percent, at $34.44 in morning New York Stock Exchange trade. The stock trades at about 23 times the analysts' average 2008 earnings estimate, compared with a multiple of 18 for McDonald's.