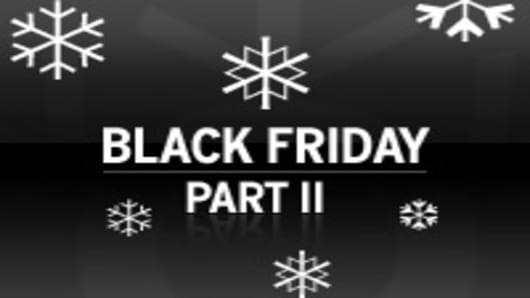 Black Friday has come and gone, but you might want to call today Black Friday: Part II as we usher in the last weekend before Christmas.

I'm inside a Best Buy in the heart of Silicon Valley, where business has been more than brisk these last few weeks. And it's not just Nintendo's Wii or Apple's iPods that are selling well. This is a broad-based buying spree for so many key categories in Silicon Valley's homegrown technologies.

And Best Buy is capitalizing big-time, while rival Circuit City Stores almost appears to have thrown in the towel. The latter company released dismal earnings today; missing the topline, reporting a torrent of much-higher-than-expected red ink on the bottomline, just days after Best Buy reported dramatically higher earnings of its own. A classic tale of two companies and Circuit City has come up woefully short.

Meantime, consumers are spending big, and much of that money is going to gadgets. Consumer spending last month jumped a full 1% last month, the biggest bump in more than three years. And gadget makers are in the catbird's seat.

Digital cameras seem very popular, good news for flash maker SanDisk and certainly a stock to watch. GPS devices are flying off store shelves -- something I blogged about a couple of months ago after Nokia's big push into the sector, so we knew that was coming.

Garmin , surprisingly, hasn't taken full advantage of this, ceding its market lead to Tom Tom , so Nokia might be the better play here since it'll now sell mapping software to all the major players.

We know video games consoles are selling strongly. But why pick a horse in that race when you can look at IBM instead, supplying the key microprocessor in all three platforms. Still, despite huge growth there, it'll probably be a blip on IBM's massive revenue screen.

Flat-panel TVs are once again enjoying a surge. The general manager of this Best Buy, Jack Dougherty, says, "The thing with the big screen TVs is I've never seen sales like this. Before, big ones were plasma, small ones, LCD. Now they're making bigger and bigger LCD and smaller plasmas. They're overlapping. 40, 42 46". The Prices are slamming down." Not to mention DLP slim projections. And that could be good news for Texas Instruments . Not to mention glass-maker Corning at the heart of so many of those flat screens.

And then there's Research in Motion . I've detailed the company's blockbuster earnings, but there's something else to consider: RIM's guidance was huge, thanks in part to its newfound focus on the consumer. The Pearl, The Curve. No longer business tools, these are becoming cool consumer gadgets, and RIM is actually a player now in holiday shopping. Another reason why this company is so hot.

Earnings should be interesting when all these companies report in January. Internet sales are strong, but slowing from last year; Best Buy's numbers were awesome; Circuit City's a mess. So it's not a slam-dunk that all these companies will post blow-out quarters.

But the ducks are lining up that this will once again be a very merry Christmas for the tech titans playing in consumer electronics.