One of the most vexing issues for pornography producers and distributors is whether to back Sony's Blu-ray high-definition DVD format, Toshiba's HD DVD, standard definition discs—or if it's even worthwhile to stay with hard copies at all when online distribution is so much cheaper.

When mainstream film company Warner Bros, a unit of Time Warner , decided in early January to exclusively back Blu-ray over HD DVD, it came as a nasty shock to a lot of adult film makers that were leaning toward HD DVD, which is cheaper to replicate, or mass produce on disc, than Blu-ray is.

The decision resonated because it also happened right before the industry's annual conference, the AVN Adult Entertainment Expos in Las Vegas Jan 9-12. 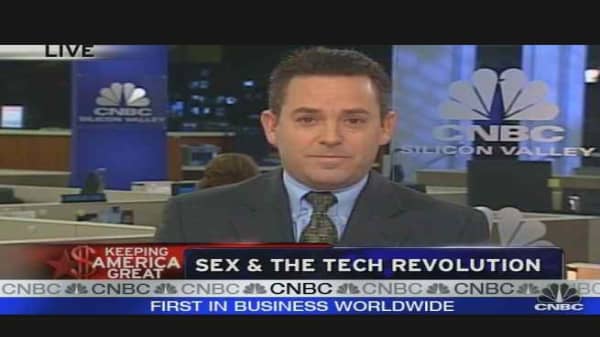 The problem with all those plans was that Hustler had committed itself to HD DVD. Then the Warner Bros. news came out.

"Now we've sort of put the brakes on a decision," says Hustler Creative Director Drew Rosenfeld, who heads up production for Hustler.

Hustler expected Wal-Mart and other discount retailers to slash prices on HD DVD players over the holidays, which is in fact what happened. Also adding to HD DVD's appeal was that replicating companies charge only about half the amount per disc to reproduce that format than they do for Blu-ray, Rosenfeld says.

Hustler could always turn to an Asian Blu-ray replicator, most of which charge less than their US counterparts, Rosenfeld says. But to do so could mean putting movie master copies straight into the hands of pirates who would illegally copy and distribute the movies themselves.

Rosenfeld says—tentatively—that he sees Blu-ray winning out over HD DVD in the end, but that doesn't mean it's necessarily a good business move to abandon the HD DVD format just yet.

"HD DVD is still a viable product, because there are a million players out there,” says Rosenfeld. “Why would all those people throw those new machines away?"

Jeff Snyder of KBeech Content, which produces about 16 movies a month, says market saturation has made it hard to make money with standard-definition discs, much less high-def. Basically anybody can make a movie and distribute it online with very little up-front money.

Most adult filmmakers aren't abandoning hard copies just yet, though. Some online distributors are even expanding toward discs.

Boys Night Out Entertainment, a production company from Ft. Myers, Fla., has distributed through the Internet exclusively, but is now moving into hard-copy distribution. A producer for the company acknowledged that discs yield lower margins than online content but said the company sees potential in the market.

"If you look at ‘Girls Gone Wild’, they're selling millions of copies," says the producer, who asked not be named because he's involved in business ventures outside pornography and doesn't want his name associated with the industry. "A lot of people out there are still buying hard copies."

Boys Night Out already shoots in high-def but is holding off on making a decision between distributing on Blu-ray or HD DVD discs.

Others see discs becoming irrelevant as online distribution takes over. George Uzyak, who owns and operates BossDVD.com with his wife Irene, predicts over-the-counter distribution surviving only another five years.

BossDVD.com claims to run the oldest Web site specializing in "Fem-Dom," or female-dominated bondage, and it began distributing on DVDs in 1994, long before other small production companies. BossDVD shoots in high-definition and sells HD DVD discs, primarily in Europe.

George Uzyak says BossDVD will begin producing Blu-ray discs if the market demands it, even though he thinks hard copy distribution is short-lived. But Blu-ray distribution would severely cut into BossDVD's margins: Replicators charge about $1 per disc for standard-definition replication, whereas Blu-ray costs between $5 and $6.

"We came into this at the right time," says Irene Uzyak, who has starred in more than 120 titles, 66 of which are on DVD. "If we had come in later, we wouldn't have been able to make money at this."

Piracy remains a worry when it comes to DVDs, George Uzyak says, but he has a simple approach to overcoming illegal copying: Make more movies.

"Beating pirates means get it out there first. Saturate the market with your own product," he says.

Current confusion in the industry contrasts starkly with 20 years ago, when the adult film business began striding toward the mainstream and held technological influence far beyond its own business, says Pure Play's Rix.

"This time, we're sitting back and saying, 'Hey, let's wait and see where things go.'"