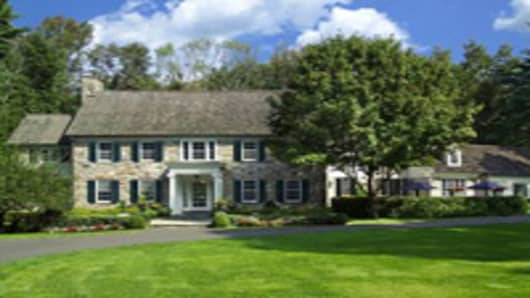 I’m doing a story on jumbo loans today and how their price and availability are affecting the million-dollar home buyers.

In the course of my research, I decided to take a look at Greenwich, CT, one of my favorite enclaves of multi, multi-million-dollar homes.

There’s an excellent resource called The Warren Group,which provides all kinds of housing data on New England, so I asked for specifics, and WOW was I surprised.

Trust me, I know that the nation’s housing bust isn’t being all that selective in whom it’s hitting, but I thought Greenwich would be one of those “micro-bubbles” of happiness, due to its proximity to Manhattan, its toney reputation, and its relatively land-strapped inventory. Not so much.

Existing home sales in Greenwich are down 37.5 percent in March from a year ago and prices are down 13.7 percent. Compare that last one to the nationwide price drop of 7.7 percent in March. What’s even more disturbing, given the median income of the typical Greenwich homeowner (I don’t know what it is, but it’s a LOT), the number of Greenwich foreclosures in March was twice what it was a year ago.

For those of you that live outside the Manhattan beltway (the tri-state area), Greenwich is where Wall Street money-movers aspire to park their Maybachs. It is chock full of stone mansions, endless lawns and big, big gates. So when I see stats such as these, I have to wonder.

If Greenwich is falling, perhaps the super-rich are not so immune to this housing crash as we’ve been saying all along.