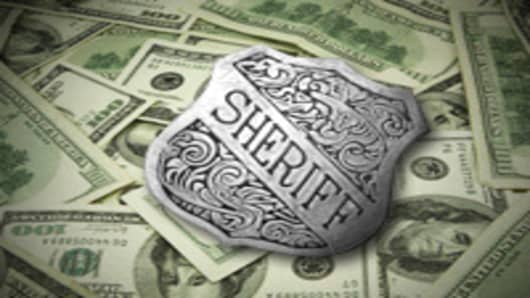 There's been some chatter about what a waste of resources this SEC probe of Jim Chanos is. Ditto for the Mark Cuban thing. Wrong! Trying to do regulatory triage is what allowed Madoff to allegedly make-off with his clients' money.

Or to put it another way, the problem isn't that the SEC is wasting its resources, it's that it doesn't have enough resources.

We have net household assets in this country of roughly $50 trillion, give or take a bunch of trillions—more take than give probably—a number that's skyrocketed in the last 50 years. The size and complexity of the financial sector has grown even faster. But the SEC is still basically operating on the scale of the 1950s.

And the FDIC is even worse off, especially considering it's hugely expanded role in the current crisis, a role that will probably (hopefully) get even bigger. In 1992 the FDIC had 15,000 employees working for it. At the end of 2007 it had merely 4,600 employees.

We've been getting away with operating on the cheap for decades, but now it's killing us.

Given the scale, complexity and importance of our economic system, we desperately need to start creating a culture of financial surveillance and accountability. We need an agency that covers the whole money community, stocks, insurance, banks, mortgages. The works. Maybe that can be the SEC. Maybe it's a new invention. However we do it, the key thing will be to hire a ton of people (more like a megaton). This isn't rocket science. You just need enough eyeballs to look at stuff, a reasonable level of education, intellect and diligence in your people, and an institutional attitude that if the regulatee can't explain something well enough for a non expert regulator to get it, that's the regulatee's fault.

And we need to establish a new ethic of real time enforcement. I'm sure there are numerous financial malefactors who should be punished for their role in the current crisis. But when do you think the SEC will get around to coming after them based on its recent record? 2012? 2015? That's not a real deterrent. Justice delayed is justice that's largely ineffective.

The best part of this plan? It kills three birds with one stone. We've got thousands of former Wall Streeters now out of work, we have MBA students and even law students struggling to find jobs, and we get to reaffirm our reputation as the world's financial safe haven that's more transparent than anybody else. We desperately need a white collar jobs program. This is it.

The great tragedy of a depression or really nasty recession is that we don't use all the resources that we could potentially put to work. Here's a great opportunity to create jobs and do something real, that would probably also resonate pretty well with the general public.

A hundred thousand new financial cops on the street, come on Mr. President, what's the downside?

Questions? Comments? Send them to millennialmoney@cnbc.com