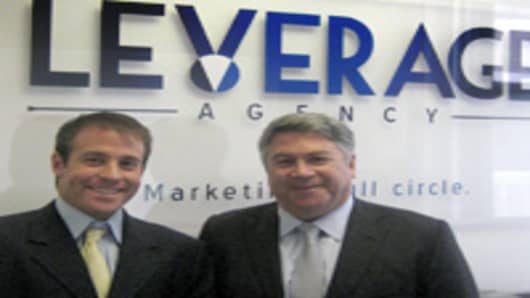 Tony Ponturo, the former vice president of global sports and entertainment marketing at Anheuser-Busch, announced today that his newly formed Ponturo Management Company will make a minority investment in sports marketing firm Leverage Agency that will make Ponturo the chairman of Leverage.

We sat down with Ponturo and Ben Sturner, the CEO of Leverage, to discuss the future of sports marketing.

Leverage has negotiated deals with Kraft, Gillette, Nestle and KFC - some of the biggest companies out there - what are these companies looking for?

Sturner:These companies don't just want signage, they want a robust platform. They require that any deal that is done touches the influencers. That it has interactivity, that it is inclusive, but has the feeling of privilege and that it cuts through the clutter.

The sports marketing landscape has clearly changed in the last couple months. What specifically is the biggest challenge?

Ponturo:There's more scrutiny to do deals that can justify a high return on investment. Before this, marketers with plenty of dollars to spend would spend money on a big event because it was big. Now marketers are going to have to justify why that event is the right place to be and how it helps narrow down their target. And properties have to realize that in order to help marketers get their return on investment, the game has to get a lot more affordable. We've just been riding this wave where things were going up and up and up. Ten years ago, you could get a primary sponsorship at the top level of NASCAR for $5 million. Now that's $25 million and, in this environment, that's going to scare a lot of people away. At those dollars, you aren't going to be getting the amount of sponsors you want. Now reduce that cost to $12 million a year and you'll have much more interest.

What do you see in the viral space?

Ponturo:Advertisers are still trying to figure out the digital space, but there's plenty that is working. You can get a pretty decent return on your investment by spending just $25,000 or $50,000. But like everything, marketers have to figure out how to quantify return on investment on that as well.

Over the last couple months, we've seen leagues and teams loosen their restrictions on what they were willing to take. There are hard alcohol associations and big casino ads all over arenas and stadiums that were not there before. Are jersey patches coming to mainstream sports?

Sturner: I definitely see that happening in the next five to 10 years. Logos are obviously on MLS jerseys, but the WNBA is apparently next. At the end of the day, it's too valuable of a piece of inventory to neglect.

Ponturo: I think the big leagues are still somewhat sensitive, but I do see the lines of what you can and cannot do gradually erasing. Maybe it will start with the NBA putting patches on warmups and see what the reaction is.

Over the past month, social media - especially Twitter - has exploded. How do you see the sports world embracing this?

Sturner:Something like Twitter is an amazing tool that everyone should embrace. It allows teams, leagues and athletes to spot trends, to become opinion leaders, to learn real time about how people feel about the fan experience. In the next six months, I expect teams and leagues to start hiring social media experts to allow them to monitor, initiate and integrate what is going on out there. So anyone in college who is looking for a job in sports, this position might be the easiest way in.

You are selling the naming rights on the Bird's Nest and the Water Cube in China, as well as for a Broadway theatre in New York. How, in this environment, are you helping companies make a decision like this more palatable?

Sturner:In the past, naming rights were used for brand awareness. Now that doesn't work. We've seen that in order for companies to do naming rights deals that have to be able to show that they can get that money back in the long term.