Vaclav Klaus isn’t your typical politician. He’s not afraid to voice his thoughts, even if it appears to be against the grain. As President of the Czech Republic, Vaclav Klaus assumed the rotating reins of the EU presidency in the first half of 2009. He has been fiercely critical of more closely integrating the 27-member Bloc and has also published a book highlighting his doubts on Global Warming.

That, along with the Obama administration's decision to scrap an anti-missile system in Poland and the Czech Republic,set the stage for Maria Bartiromo's exclusive interview with the President. 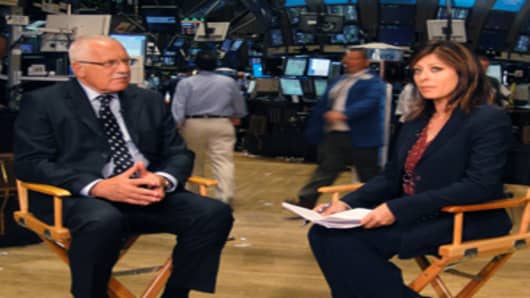 Klaus kicked off the discussion by stressing the "extremely friendly and productive relations" between both sides.

He said that President Obama's decision was not a huge surprise given the "rumors in the last couple of weeks and months were aiming at that decision".

Klaus told Bartiromo he did not think the move would damage the U.S. – Czech relationship, interpreting it as "a shift in the technical details of defense issues in this country and elsewhere."

But perhaps one of the topics Klaus is most passionate about is global warming. While at the United Nations on Tuesday, Klaus described his frustrations, saying "I'm afraid everyone fully accepted the Global Warming dogma and then I say something different and everyone looks at me as a strange person."

Klaus spent the last few years researching the subject, covering both the scientific as well as the political side. He says politicians "are wrong and they are not listening to the scientific community.” He doubts if Global Warming even exists, questioning "why it has happened or what may happen." Klaus told Bartiromo that for many leaders, "it is very cheap" to make a pledge to reduce CO2 emissions by a target that’s beyond their political career. 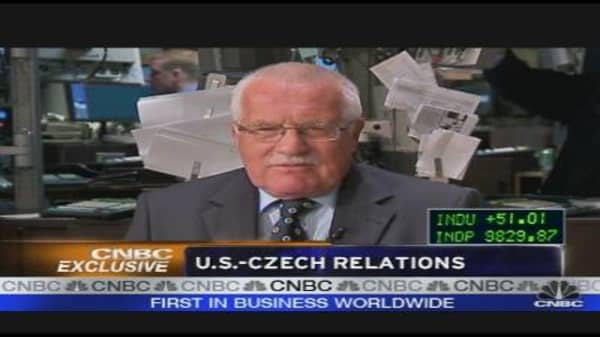 Klaus also weighed in on Washington’s cap and trade approach.

“I hope that the debate about cap and trade in the U.S. will become again serious and then I hope that people in Washington will be able to maybe stop it,” said Klaus.

He thinks it should be scrapped, as “the debate should first be about the rationality of debt instruments or another instrument” and not about “introducing a tax on carbon or quasi-sophisticated trading scheme.”

Bartiromo wrapped up the interview with a discussion on the Czech economy, which saw a record 5.5% contraction in the second quarter. When asked to characterize the economic landscape in Eastern Europe, Klaus said, “We feel the decline and decrease of demand for our exports.” But overall, he is confident about his country’s economic prospects, saying “We are approaching the economic level of Western Europe again as we used to be 50 years ago." His biggest challenge however, will be on further EU integration. Of that, Klaus said, "Inside the EU, we are more and more masterminded from Brussels and we feel we are losing a lot of our sovereignty and our ability to decide for ourselves."