Market Direction into 2010 Depends on This: Analysts

The market will continue to rise, with the S&P finishing the year above 1,100, but its success hinges on the performance of the retail sector this holiday season, said Steve Grasso, market analyst at Stuart Frankel. 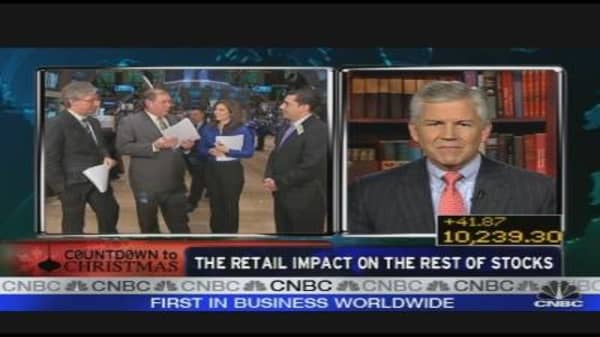 Retailers have adopted the McDonald's Dollar Menu strategy, using low prices to draw customers in, and then getting them spend on pricier items once they arrive, Grasso said.

Because they've lowered prices and inventory levels, Grasso believes the sector will rise heading into 2010.

"The bar is set way too low against the holiday sales," he said. "I think that's why you're going to have an upward surprise."

But Michael Farr, president of Farr, Miller & Washington, said he doesn't think the consumer has returned. He pointed to Abercrombie & Fitch's earnings, which were down more than 60 percent on the year, as evidence.

"I think we're still running on the jet fuel of this stimulus," Farr said. "The important thing coming out of these retail numbers is: will the consumer actually show back up at the party at some point?"

Also Friday, the Reuters/University of Michigan Surveys of Consumers said consumer sentiment fell to its weakest level in three months.

Grasso personally owns Wal-Mart stock. Disclosure information was not available for Farr or his company.