Before everyone gets their underwear in a bundle, the Senate merely voted to start the debate and amendment process for the Reid Health Care bill. The 60 vote barrier was almost pre-ordained before it took place. The fun starts now with several Democratic senators warning they won't vote again on the bill without significant changes. Make no mistake, this bill has traveled far and wide from it's original intent of inclusion and improvement that was promised at the start of this process.

Remember, the reason why we started down this path was to bend the cost curve back downwards for the ever increasing expenditures associated with health care. These costs were considered detrimental to the fiscal health of the United States in the long run. There was also a goal of getting more covered or into insurance to reduce the overall costs for the nation. How far have strayed from this dual purpose.

The Reid bill is a potent mix of tax increases and mandates that will still cost between $800 billion to $1 trillion depending on what will be included in the final bill. There are tax increases on individuals and workers, there are fees on the health care industry, there are increasing costs for consumers, and there are tax increases on businesses. From the tax on the high cost health plan to fees on insurance plans for comparative effectiveness research trust fund to the "free rider" penalty excise tax, this bill is amazingly complex and diverse in it's scope to raise receipts to pay for what it wants to do. 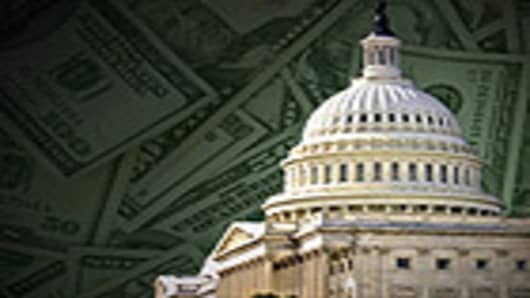 Taking a step back, this is indicative of what is happening throughout the US government as it struggles to pay for new programs and new initiatives.

A massive budget deficit and opinion polls showing voter concern over this deficit is why the Democratic majority is growing increasing reluctant to expand spending. The best example is over Afghanistan. Senate chairman of the Armed Services committee Carl Levin (D, MI) said that an “additional income tax to the upper brackets, folks earning more than $200,000 or $250,000” a year, should be used to pay for more troops sent to Afghanistan.

The Hill reports that Rep. David Obey (D-WI.), the chairman of the House Appropriations Committee, warned that if President Barack Obama decides to send additional troops to Afghanistan, it should be funded with the new tax. "If we have to pay for the healthcare bill, we should pay for the war as well," Obey told ABC News in an interview, "by having a war surtax." (Maybe he's still angry Northwestern beat Wisconsin on Saturday.)

With financial newsflow heavy today with stories of global fiscal imprudence, Greece, Japan, UK, and US are in the spotlight. The NYT runs a story today about how current low rates mask an increasing debt load that is unsustainable should rates move up. "With the national debt now topping $12 trillion, the White House estimates that the government’s tab for servicing the debt will exceed $700 billion a year in 2019, up from $202 billion this year, even if annual budget deficits shrink drastically. Other forecasters say the figure could be much higher."

This situation is emblematic of a global concern about government's finances and is why sovereign CDS spreads continue to move higher. The markets are assessing the potential for a sovereign default and trying to figure out who is most likely to go.

________________________
Andrew B. Busch is Global Currency and Public Policy Strategist at BMO Capital Markets, a recognized expert on the world financial markets and how these markets are impacted by political events, and a frequent CNBC contributor. You can comment on his piece and reach him hereand you can follow him on Twitter at http://twitter.com/abusch.