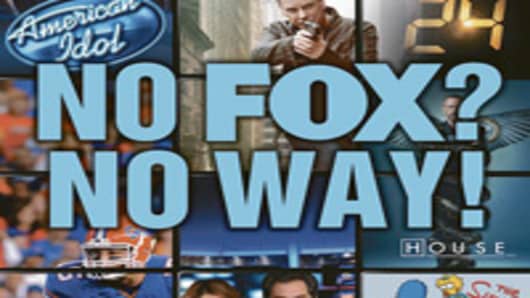 The nearly billion-dollar battle between broadcasters and cable operators over programming fees has gone public.

The News Corporation is threatening to remove its Fox stations from Time Warner Cable systems at the end of this week if the cable company does not agree to pay sizable subscriber fees, the same way it does for cable channels. In negotiations, the News Corporation is pushing for about $1 a month for each subscriber, potentially setting a precedent for broadcasters that are seeking a new revenue stream to offset advertising declines.

Fights over retransmission affect every person who pays for television, because the fees are ultimately added to monthly bills. It will “without a doubt translate to increasing costs for consumers that buy packages of programming,” said Melinda Witmer, the chief programming officer for Time Warner Cable. (It announced annual rate increases for customers this month.)

The News Corporation is demanding the money on behalf of its 27 owned stations, but it is also pressuring about 150 affiliates for a share of their retransmission payments.

The public posturing is the clearest sign yet that the owners of Fox, CBS and other over-the-air networks are demanding substantial amounts from the cable operators that carry their content into millions of homes.

For most of the last two decades, the owners of networks effectively gave away the retransmission rights for their stations in exchange for prime positions on cable systems. Now, however, beleaguered networks and their affiliates want direct payments for their programming. Cable channels like TNT and ESPN operate the same way; they make money both from advertising and from subscriber fees.

Some over-the-air stations started to wring fees out of smaller carriers several years ago. For stations, the fees normally amount to nickels, dimes and occasionally quarters for each subscriber each month. But Fox is asking for much more.

The companies declined to comment about the specifics to the negotiations, but people close to the matter confirmed the $1 demand by Fox’s owned and operated stations.

“Time Warner packages and resells our signal for its customers, and they make a lot of money doing it. We simply want to seek fair compensation for that,” said Mike Hopkins, Fox’s president of affiliate sales and marketing.

Mr. Hopkins says the dispute is part of a larger negotiation with Time Warner Cable that also involves some of the News Corporation’s cable channels, like FX and the Speed Channel.

The talks — which are about to start in earnest in Los Angeles — pit Glenn A. Britt, the chief executive of Time Warner Cable, against Chase Carey, the new president and chief operating officer of the News Corporation.

Mr. Carey has experience on the other end of the table: he ran DirecTV, the satellite distributor, until last June. He has said publicly that Fox is worth $5 a month, given its sports programming and prime-time hits. That would make Fox even more valuable than ESPN, the most costly cable channel, which earns about $4 for each subscriber.

“We realize this is going to be a tough challenge,” Rupert Murdoch, the chairman of the News Corporation, told investors two months ago, “but we’re determined to take a leadership position in creating an economic template for the future.”

In an assessment last week, the Miller Tabak analyst David C. Joyce said the talks were “precedent-setting” for Fox. Some analysts believe the companies will reach a compromise of 50 to 60 cents for each subscriber.

Satellite operators like the Dish Network and telecommunications companies like Verizon have generally been more willing than cable operators to compensate local stations, television executives say. But in the last year, CBS reached significant deals with Time Warner Cable and Cablevision. CBS reportedly receives up to 50 cents for each subscriber, although the deals vary.

“The world has acknowledged that networks deserve to get paid for their content like cable networks get paid,” said Leslie Moonves, the chief executive of the CBS Corporation, who has been the industry’s most vocal supporter of retransmission fees.

The amount paid by cable, satellite and telecommunications operators “has grown by double digits” for each of the last three years, said Justin Nielson, an analyst for the research firm SNL Kagan. He projects that stations will earn $933 million in retransmission fees next year, up from $739 million this year.

The definition of 'fair value.'

But the fees account for just 5 percent of station revenue, according to SNL Kagan — hardly a savior for broadcasters. Cable channels, meanwhile, are on track to earn almost $28 billion from fees next year.

Creating a new front in the fight, networks like CBS and Fox are telling affiliates to start sharing the retransmission fees they receive from carriers, too. They figure that because they provide marquee programming, they should share in the fees.

Between Fox and Time Warner Cable, the fight is not about whether Fox should be paid, but about how much. The cable company says that it is willing to pay for retransmission, and that it is only balking at Fox’s asking price. “There’s no question we’ve seen an increase in desperation on the broadcast side,” Ms. Witmer said.

Ahead of several renewal fights, the company called on customers to “get tough” in TV commercials and print ads that claimed that networks like Fox were “demanding price increases as high as 300 percent.” The commercials played like political ads, complete with ornaments falling off an animated Christmas tree.

Fox responded with a campaign Web site of its own that said it was merely asking for “fair value compensation.” It noted that TNT, a cable channel with a fraction of Fox’s budget, earns about $1 per subscriber. On Monday night it informed viewers across the country about the feud in graphics on the screen during the medical drama “House.”

Ms. Witmer said there were crucial differences between Fox, which is available over the air, and TNT, which is a “cable product.” She said Time Warner Cable was concerned about the amount of programming that Fox puts on the Internet, undermining the cable business model. Unlike broadcasters, she added, cable channels provide carriers with advertising time.

Fox will argue in the coming days that Time Warner Cable can easily afford to pay more for its signal. Mr. Hopkins said Monday that the cable operator’s rate increases in New York alone, which go into effect in January, “would be more than enough to pay for Fox in all these markets.”

Caught in the middle are TV viewers. Last week Senator John Kerry, Democrat of Massachusetts, called on both sides to strike a deal because, he said, “millions of football fans are depending on it.”

In a letter to Mr. Britt and Mr. Carey, he suggested that the stations remain available to cable customers if the two sides fail to reach a deal by Jan. 1. For how long? Mr. Kerry wrote, “Through the college bowl season.”