Signs that the economy is recovering are popping up everywhere. Here are a few you might have missed: 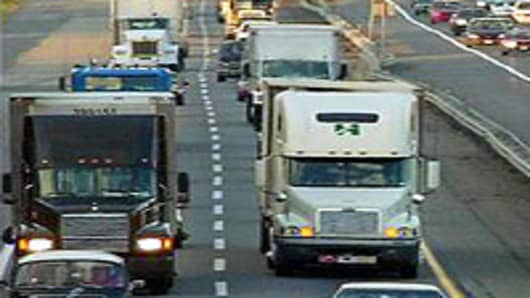 10-4, We've Got Trucker Shortages Ahead, Over. The latest results from the transportation industry, including UPS, show freight demand is on the rise. And that, coupled with stricter safety regulations and retiring Boomers has got Big Daddy and his CB buddies all abuzz about coming trucker shortages, Reuters reports.

Logistics-consulting firm FTR Associates estimates the shortage to be 180,000 this year and a whopping 500,000 next year.

If you're interested, here are some valuable resources: 10 Steps to Become a Truck Driverand How to Generate Your CB Handle.

Flick Your Bic. You may think of office supplies as a staple (no pun intended) but the type of supplies people buy is a sign of discretionary spending — and a good indication of the recovery.

So, what are they trading up on? Apparently, pens. As people feel better about the economy, they are increasingly flicking their stick pens to the curb in favor of the fancier rollerball pens, office-supply chains report.

“As the economy begins to turn, we are seeing a shift in sales of items that were once considered to be more discretionary during the height of the recession,” said Steve Mahurin, executive vice president of merchandising at Office Depot . “We have seen a large increase in terms of sales of rollerball pens vs. traditionally lower-priced stick pens over the past few months.”

Of course, when we start to see an uptick in glitter-dusted post-it-note sales, that's when you'll know the economy is really back!

‘Jerk’ Insurance. Real estate has been a closely-watched gauge of the recovery. But behind the headlines, there's another indicator of how the recovery is shaping up — ‘jerk’ insurance. That’s a term some real-estate insiders use when they want to have a caveat on a sale that prevents the buyer from reselling the property within the next few years, making a huge profit and making the seller “look like a jerk.” Donald Trump, Bill Ackman and Carl Icahn use it, Bloomberg reports. The reason why it’s an indication of recovery is because no one in the industry worries about ‘jerk’ insurance when the market is on the way down, one commercial broker told the news service.

Jerk insurance — brilliant! Now, if only we could get that for protection against jerk drivers, jerk bosses, jerk neighbors — and that jerk who cut in front of you in line at the drugstore!

Have a sign of the recovery you think we missed?Email ponyblog@cnbc.com or drop a line in the comment box below.

More from The Pony Blog: ponyblog.cnbc.com