Remember April 2009 when the G20 met in London? Gordon Brown was hosting world leaders and claiming he had saved the world while protests brought large parts of the UK capital to a halt. 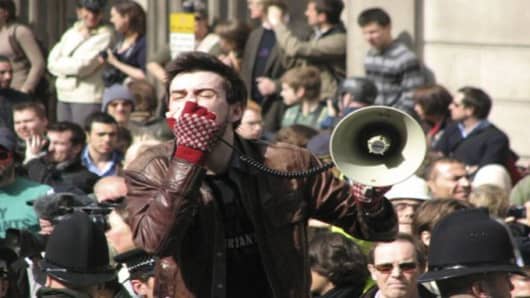 Sharon Lorimer
Tens of thousands of people voiced their anger at the world economic crisis in London's financial district in April 2009, one day before a summit by leaders of the G20 countries in Europe's financial capital.

The equity rally from the March lows was well underway as investors stopped worrying about Armageddon and praised global leaders for averting it.

Fast forward 15 months and G20 finance ministers are preparing to meet in Busan to discuss how we avert Armageddon yet again.

A draft of the G20 communiqué ahead of a meeting, quoted by Dow Jones, says the world’s major economies will do whatever it takes to ensure strong, sustainable and balanced growth.

“We remain on a constant state of alertness and are continuously pursuing well coordinated economic policies," the press release says.

The high hopes of 15 months ago have been dashed, Stephen Lewis from Monument securities said, as many of the problems faced last year remain, with a few more to boot.

“The chief imbalance in the global economy, between the USA and China, is arguably as dangerous now as it was before the financial crisis erupted in 2007," Lewis said.

"Though the US trade balance showed some improvement as long as US gross domestic product was contracting, the deficit is increasing again now that domestic demand is rebounding,” he noted.

Lewis expects little or no discussion of this point and sees China building up even more holdings of US Treasurys as a result. Instead of focusing on the world’s major imbalance, talk will turn to the European crisis.

"They will hardly point out that the US economy might now be performing as badly as the euro zone's, if policymakers there, and the financial markets generally, had taken the US fiscal deficit as seriously as they take the deficits of some euro zone member-states.”

Cut Spending but Only in Europe

As a result, the G20 will back plans to significantly cut back on government spending in Europe.

“EU policymakers strongly suspect that the euro is a target for speculative selling. They are unlikely to countenance a policy that might increase the amount of ammunition that could be marshaled against their currency,” Lewis said.

He believes the euro's straight-jacket, one-size-fits-all approach is the problem but sees no chance of anyone actually discussing that in open during the 2 day meeting in Seoul.

“The root-problem is the euro and the inflexibility it imposes on euro zone economies. But G20 finance ministers cannot afford to recognize this, mindful as they must be of the potentially destabilizing influence, not only in Europe but in the rest of the world, of any widespread loss of confidence in the euro arrangements,” he said.

Following months of unilateral action on financial regulation Lewis holds out little hope of a new spirit of cooperation.

“The G20 nations would lack credibility if they now claimed they were making a coordinated response," he said.

Last year's decisions in some European countries to tax bank bonuses and the US administration's embrace of the 'Volcker rule' did not necessarily breach G20 commitments, according to Lewis, but "the unilateral nature of these initiatives did.”

Agreement to disagree appears to have emerged from US Treasury Secretary Timothy Geithner's recent visit to Europe, but even countries in the European Union go for different approaches.

Some countries want to use a bank levy to set up an insurance fund to help with the cost of future bank bailouts, while others say such a scheme would introduce an unacceptable degree of moral hazard into the financial system, Lewis noted.