State unemployment rates have shown only minimal improvements, with 18 states and the District of Columbia reporting decreases in July, 14 showing increases and 18 with no change at all, government data released Friday showed. 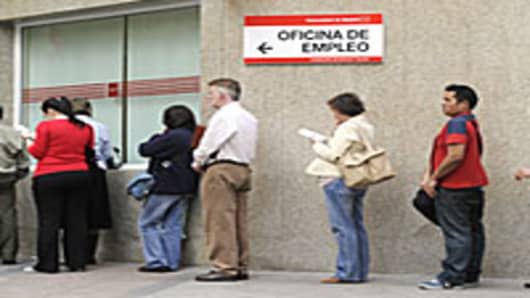 Dominique Faget | AFP | Getty Images
People wait in line at a government employment office in the center of Madrid.

Just a month before, 39 states and the District of Columbia saw their rates decrease.

Nevada had the highest jobless rate in the nation for the third month in a row, since dethroning Michigan for the top spot in May, according to the report released by the Labor Department.

Nevada had a record high jobless rate of 14.3 percent in July, up from 14.2 percent in the previous month. It shed a total of 9,600 jobs in July, making the 16th consecutive month the state has seen its unemployment rate increase.

One of the main reasons is housing.

Nevada is "ground zero" for the housing bust, said Nicholas Colas, chief market strategist of ConvergEx Group. The state has the highest foreclosure rate in the country and the housing slump is clearly affecting jobs. The state lost 100 construction jobs in July.

Michigan, No. 2 on the list, saw its jobless rate drop slightly to 13.1 percent in July from 13.2 percent in June. The state's rate has been falling steadily since it hit a high in December 2009 of 14.5 percent. The improvement, Colas said, is because of the improving auto industry which is "slowly on the mend."

Manufacturing jobs rose by 20,000 in Michigan during the month.

California had the third highest rate at 12.3 percent, followed by Rhode Island (11.9 percent) and Florida (11.5 percent). (See the top 10 highest in our slideshow.)

Nationally, the job picture worsened in July, with the economy losing 131,000 non-farm payrolls. The unemployment rate remained unchanged at 9.5 percent.

The new state jobless rates data come a day after a report showing initial weekly jobless back above 500,000 for the first time in nine months.