For nearly two decades, the mathematical whiz Peter Muller and his secretive band of traders have helped power Morgan Stanley to bigger profits. But now Morgan Stanley and Mr.Muller are in advanced talks about splitting up. 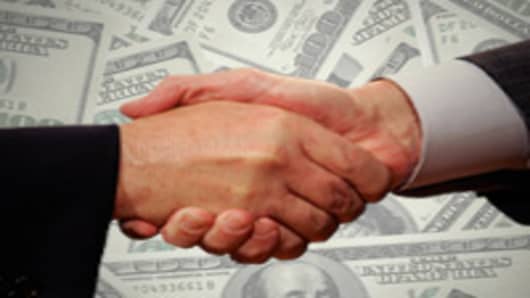 Under the plan being discussed, Morgan Stanley would spin off Mr. Muller’s unit, called Process Driven Trading, and keep a minority stake.

Mr.Muller and his team would get access to Morgan Stanley’s infrastructure, including its legal and other resources.

Mr.Muller, 47, is part of a new breed of investors called quants — short for quantitative — who use high-speed computers to turbocharge their mathematically powered investing skills.

They program their computers to track different data and variables like the historic relationship between certain pairs of stocks.

If the relationship goes out of kilter, a quant might make a bet, amplified with borrowed money, that the historical relationship between the stocks will return.

The strategy has been immensely profitable for Morgan Stanley.

The Process Driven Trading unit generated an estimated $4 billion in profits in the 10 years through 2006, according to Scott Patterson’s book, “The Quants: How a New Breed of Math Whizzes Conquered Wall Street and Nearly Destroyed It” (Crown Business, 2010).

Those gains were after the unit took a 20 percent slice, according to the book.

That means that Mr.Muller and his team were paid about $1 billion over a decade, making them among the most highly paid executives in the firm.

A separation between Morgan Stanley and Mr.Muller has been in discussions for years, but talks accelerated in the wake of the passage in July of the Dodd-Frank Act, which restricts proprietary trading by Wall Street firms.

Morgan Stanley and Mr.Muller had been discussing another option where the unit would have moved to Morgan Stanley Asset Management.

But the act makes that far less likely now, said people close to the situation who were not authorized to speak publicly.

A spinoff of the prop trading unit would largely mirror a plan by Morgan Stanley to sell a majority stake in FrontPoint Partners, a Greenwich, Conn., hedge fund it bought in 2006, to the partners.

Other Wall Street firms are retreating from the business of betting on markets with their own money.

Goldman Sachs’s proprietary trading desk, which spawned the careers of a number of Wall Street luminaries and hedge fund founders, is moving to Kohlberg Kravis Roberts.

Mr.Muller’s unit is the last significant proprietary trading business at Morgan Stanley, with the exception of a small statistical arbitrage business that operates out of the bank’s equities division.

Over the years, as much as $6 billion of Morgan Stanley’s money has been housed in his unit.

A spinoff, while freeing capital for Morgan Stanley, would also benefit Mr.Muller, allowing him to raise money from third-party investors and possibly paving the way for him to expand his business, which requires large amounts of capital.

A 1985 mathematics graduate of Princeton, Mr.Muller, who is passionate about math and loves music, started the Process Driven Trading unit in 1992.

From the start, its esprit de corps was more Silicon Valley than Wall Street.

Mr.Muller stocked the group with Ph.D.’s and housed them on their own floor, away from the hurly-burly excitement of Morgan Stanley’s mammoth stock trading floor.

To stimulate productivity and cerebral thinking, he had ceiling lights installed that changed color every 15 seconds.

The group was always known for its close-knit culture and camaraderie.

The math whizzes worked together and often played together.

Many of their exploits — painting a mural for a school in Harlem, a recent volleyball game and a ski trip — are displayed on the walls of their ninth floor offices in Morgan Stanley’s Midtown Manhattan headquarters on LCD screens that flip from one photo to another every 10 seconds.

The group was as eclectic as its leader.

Even though he and his unit were minting money, Mr.Muller quit working full-time for Morgan Stanley in 2001, saying, according to a short biography on his Web site, that he realized he “can no longer find happiness in the corporate world.”

Over the next several years, he traveled to Bhutan, New Zealand and Hawaii, hiking and kayaking, with his five-pound keyboard in tow.

He took up yoga and began writing crossword puzzles, many of which appeared in The New York Times and other newspapers.

He indulged his love of music, writing songs, releasing two albums under his own label and playing his guitar on the streets of Barcelona and in New York City subways.

He also pursued his passion for poker, a favorite pastime of quantitative traders. He played in a few tournaments on the World Poker Tour.

In his first tournament he came in fourth and took home nearly $100,000. In late 2006, Muller returned full time to Morgan Stanley.

For decades, he and his team, which eventually grew to about 60 members with operations in London and Tokyo, operated well below the radar, quietly and consistently churning out billions of dollars in trading profits for the investment bank.

As the unit prospered, Mr.Muller became wealthy and started his own family office, Chalkstream Capital, to manage his assets.

Chalkstream has since branched out to manage the money of others.

But, in summer 2007, the unit hit a big speed bump when aberrational stock price moves from the United States to Japanese and European markets caused losses of about $500 million in a little more than two weeks.

The convulsions at the Process Driven Trading unit were felt at so-called quant funds around the globe.

Still, even amid the chaos around him that summer, he managed to play at Caffe Vivaldi in Greenwich Village. He still appears there from time to time, and performed Wednesday night.