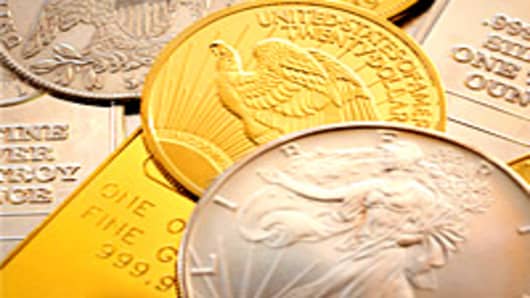 Why are so many state legislators beginning to call for issuance of a form of gold money?

Legislators in a dozen statesare looking at legislation about gold or silver-based currency, including, right now, Utah, South Carolina, Virginia and New Hampshire. States haven’t issued money for over a hundred years. So … why now? There is disgust by state legislators with the federal government’s promiscuously printing money. This reflects the views of those who wrote and adopted the United States Constitution.

The transcript of the debates in the original Constitutional Conventionshows the attitude of the Founders toward paper money was one of disgust. In debate one delegate, Roger Sherman, called for the insertion of an absolute prohibition against states issuing their own paper money.

Mr. Wilson and Mr. Sherman moved to insert after the words 'coin money' the words 'nor emit bills of credit, nor make any thing but gold and silver coin a tender in payment of debts' making these prohibitions absolute…

Mr. Elsesworth thought this a favorable moment to shut and bar the door against paper money. The mischiefs of the various experiments which had been made, were now fresh in the public mind and had excited the disgust of all the respectable part of America. By witholding the power from the new Governt. more friends of influence would be gained to it than by almost any thing else. Paper money can in no case be necessary. Give the Government credit, and other resources will offer. The power may do harm, never good.

Those who wrote the Constitution decisively stripped the federal government of the power to issue inconvertible paper money. And stripped it stayed… until, temporarily, during the Civil War. Saving the Union was of transcendent importance. A strong constitutional argument exists for the legitimacy of paper money as an expedient. But it set a bad precedent.

"The American people are patient but we are not stupid." -Senior Advisor, American Principles Project, Ralph Benko

For most of American history dollars were convertible into gold or sometimes silver. It is a 20th century innovation to have inconvertible money. FDR suspended domestic convertibility. And then… Richard Nixon’s 1971 suspension of the convertibility of the dollar into gold put the final nail into the dollar’s coffin. President Nixon announced this as a temporary suspension.

President Nixon made certain promises to America when he suspended convertibility of the dollar. August 15, 1971:

“I have directed Secretary Connally to suspend temporarily the convertibility of the dollar into gold ….

Now, what is this action--which is very technical--what does it mean for you?

Let me lay to rest the bugaboo of what is called devaluation.

If you want to buy a foreign car or take a trip abroad, market conditions may cause your dollar to buy slightly less. But if you are among the overwhelming majority of Americans who buy American-made products in America, your dollar will be worth just as much tomorrow as it is today.” (Emphasis supplied.)

Well. The dollar today is worth less than a quarter was worth in 1971.

The American people are patient but we are not stupid. We have noticed the steady erosion of the dollar’s buying power, that fact that our dollars are worth 80% less than the day of “the Nixon shock.” We have noted the bankruptcy of the assurances we were given.

Yet Washington has been curiously unresponsive to the suffering brought by its failed promise. Why? Washington has itself been a primary beneficiary of monetary depreciation.

The federal government spent $15 billion from 1789 – 1900. Not $15 billion a year. $15 billion cumulatively. Uncle Sam will spend $10 billion a day in 2011. The federal government spends more every two days than it did altogether for more than America’s first century. Although these sums are not adjusted for inflation they give a correct impression of the magnitude of the change from what our Founders set forth and our early statesmen delivered.

How does Washington get its hands on so much money? Three ways. Taxing us, on which it is maxed out. Borrowing — deficits — to which there is a growing massive resistance. And there is a third and even more pernicious way: printing dollars. Washington prints money – such as Chairman Bernanke’s massive $800B+ “quantitative easing.” Wildly printing money erodes the value of the dollar. It will damage every American’s hard-earned savings.

The power to print money at whim is wrong.

It is toxic to our personal and national wellbeing.

And it is unconstitutional.

So legislators in twelve states are exploring gold-based currency. It is reprehensible for national elites to deride those who are doing so. Whatever objections one might have to the mechanisms being considered the impulse is legitimate and even noble. State legislators are challenging the federal abuse of an unconstitutional power, challenging the issuance of unhinged paper money.

Federal officials should take these state initiatives as a cue. Federal officials have sworn to preserve, protect and defend the Constitution of the United States. Let them take their oath seriously and restore the convertibility of dollars to gold.

Ralph Benko, a member of the bar of the State of New York, is Senior Advisor, Economics, of the American Principles Project, and was called by the United States Department of the Treasury to testify before the U.S. Gold Commission on the constitutional history of American monetary policy.