For the 15 million Americans who can’t find jobs, the labor market is like an awful game of musical chairs. There are many more players than there are available seats.

Yet at Extend Health, a Medicare health insurance exchange firm in Salt Lake City, Utah, the problem is just the opposite—a growing number of chairs to fill and not enough people with the skills to fit the jobs. 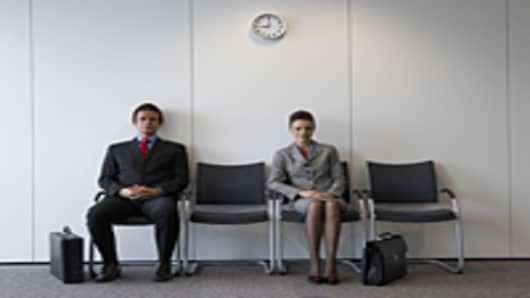 “It seems like an oxymoron in this environment that you can somehow be challenged to find great workers,” CEO Bryce Williams admits, almost sheepishly.

For this fall’s Medicare Enrollment season, the firm will need close to a thousand workers. The ideal candidate is over 40, with a background of financial services in order to qualify for insurance licensing.

“They need to be able to pass the state of Utah exam, which is not easy," Williams explains. “They need to have a background in comparing the financial metrics of trying to help someone compare and analyze and give great advice.”

Williams has hired a recruiter, plans to roll out billboards along Interstate 15 in Utah, and is now looking at establishing a new call center out of state where the firm can find more people to train and hire.

“We like being in Utah but at a certain point you max out on the total pool of people that you can tap, “ Williams says. “So, we're going to have to look at other states.”

Part of Williams’ problem is that his business is in a sector that’s facing a skills gap.

Overall labor demand softened in February, but online ads for computer science jobs were up more than 15 percent from January, according to The Conference Board Help Wanted Online Data Series (HWOL).

While there are more than 25 job seekers for every open position in fields like construction, the exact inverse is true in technology, health and science-related jobs.

For computer science jobs and skilled health care practitioners, there were just over three ads for every job seeker in February. For life sciences jobs like medical science researchers and chemists, the ratio was 2 to 1.

"Many people are under water on their mortgages and they can’t move...So, they lost a job in Las Vegas and can’t move to L.A. because of their mortgage." -Moody's Analytics, Mark Zandi,

"It’s the equivalent of a seller’s market in real estate,” says Jeanne Shu, HWOL Project Coordinator. While those occupations are seeing a lot of growth, employers are scrambling to find available qualified workers.

“If they can't find the right person with the right skill set they'll hold out longer for them."

But employers also appear to be holding out for ideal hires for jobs that aren’t facing a skills gap, says professor Steven Davis of the University of Chicago Booth School of Business, who recently co-wrote a paper on the subject.

“Our best estimate is maybe 20 percent of shortfall in hires per vacancy in the last couple of years can be accounted for by lower recruiting intensity by employers.”

Though they may be placing ads, they don’t appear in a rush to fill vacancies.

A number of economists are closely watching the relationship between the jobs vacancy rate and the unemployment rate—what’s known as the Beveridge Curve, named for economist William Henry Beveridge.

“In March last year the vacancy rate started to rise, without drawing down in the unemployment," says professor Steven Davis, making for what he sees as a troubling move in the curve. “It broke down rather substantially.”

Davis believes the repeated extension of jobless benefits for long-term unemployed workers has made job seekers more willing and financially able to hold out for better jobs. But, in the mean time, their skills are falling behind, making them less employable.

“We have to some extent set ourselves up to have 1 to 2 percent of the workforce without jobs for long time, with dim prospects of returning to a job market even after the market recovers,” he cautions. “That's what kind of worries me.”

"The loop in the Beveridge that is evident now has been seen in the past business cycles," Dudley said in a speech at the Stern School of Business earlier this week. "This strongly suggests that the rise in job mismatch has a cyclical component."

When Workers Can’t Move For Jobs

Mark Zandi, of Moody’s Analytics, believes the shift in the Beveridge Curve is likely temporary. But, he is concerned that the downturn in the housing market may be making it harder for job vacancies to be filled.

Zandi’s own firm is feeling the impact of the skills gap. He’s having trouble finding and hiring junior economists with advanced degrees.

“That part of the job market is tightening up quite significantly.”

Extend Health’s Bryce Williams is actively looking at options beyond his company's base in Utah, and beyond that is also trying to develop a home-based model so that he can bring his jobs to the workers he needs. But he's worried he won't be able to ramp up hiring enough, and that would kill his company's growth.

“What it could require us to do is meter the number of clients we can take on, in any given year," he says.

With the health care exchange sector poised for rapid expansion over the next two years because of the health reform law, Williams is determined not to turn business away.