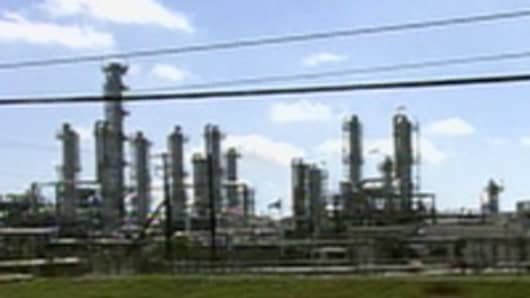 West Texas Intermediate jumped 2.1 percent to $96.89 a barrel on the New York Mercantile Exchange, decidedly above the $94.45 close of June 22, the day before the announcement on the release of 60 million barrels from reserves.

"I think we could probably test that $100 mark again. I also think for it to be sustained up there, you'd have to have something a little more going on, like geopolitical problems or some demand pickup," said Anthony Grisanti, president of GRZ Energy.

Some traders said the price gains Tuesday came from speculation that demand could tighten if the world economy improves, but others pointed to momentum and technical factors.

The WTI August futures contract broke above its 200-day moving average of $96.18.

On June 22, the day before the announcement by the International Energy Agency that crude would be released from strategic reserves, it was at $95.41. It hit a low close of $90.84 on June 27.

"The volume is very light. The market is very quiet," said Addison Armstrong of Tradition Energy. "After repeated attempts to break through the 200-day moving average on August WTI, it broke through there this morning. A settlement above that would be constructive for further price gains for the remainder of the week. That's what's going on today, particularly with the dollar higher and equities staying unchanged."

Another bullish technical message was also at work for WTI. "There was an inverse head and shoulders on the charts, with the neckline at $96 (WTI)," said Michael Fitzpatrick, editor of the Energy Overview newsletter.

"It means that we've come a long way since those big sell offs in early May, and the bears are starting to lose some of their power, and the momentum is shifting back toward the bulls," said Fitzpatrick.

He said the market reacted positively to the Greek debt deal, and WTI could head to the $102 range. "That pushed it back toward technical levels and momentum just took over," he said.

But the market faces other near term hurdles, including Friday's June jobs report, widely expected to be weak.

Armstrong believes the IEA and U.S. Department of Energy could dip back into reserves to try to control rising prices. The IEA said the initial release was to make up for lost Libyan production. But Fitzpatrick said the criticism against the move was significant enough to crimp further actions.

"It would be like intervention in he currency markets in the 1980s. The intended purpose was to psychologically drive down prices and every time they intervened it almost expressed their desperation...it would be like putting gasoline on a burning fire," said Fitzpatrick.