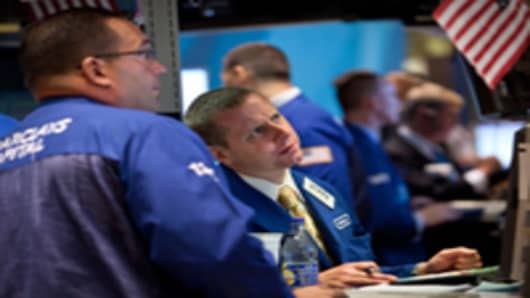 So how do they work? When are they used? CNBC explains.

What are market circuit breakers?

This is when a major stock or commodities exchange stops trading temporarily because an index, or even an individual stock, has fallen a certain percentage during a trading day.

The purpose is to prevent a market or stock price free-fall by trying to rebalance buy and sell orders.

For example, if the Dow Jones Industrial Average falls by 10 percent, the New York Stock Exchange (NYSE) might halt market trading for one hour. There are other circuit breakers for 20 percent and 30 percent declines.

In addition to market-wide circuit breakers,the Securities and Exchange Commission approved market rules on a trial basis in 2010 allowing circuit-breaker pauses for certain individual securities whose prices move 10 percent or more in a five-minute period.

These circuit-breaker pauses apply to stocks in the S&P 500 Index, the Russell 1000 Index, and several hundred exchange traded products. They halt trading in the applicable security in all U.S. markets for five minutes.

Until 1997, the markets used a point drop rule—that is, looking at how many points the markets declined, rather than the percentage of the move, to trigger circuit breakers to stop trading.

This point-drop rule caused trading to halt on Oct. 27, 1997, even though the decline was only about 7 percent. The rule was subsequently changed to respond to percentage drops rather than point drops. The rules have since been changed back to point drops as well as percentage declines.

When do market circuit breakers kick in?

The rules for using circuit breakers have changed over the years, and are usually calculated on a quarterly basis.

On June 30, 2011, the NYSE issued these guidelines for using circuit breakers:

A 3,650-point drop will halt trading for the remainder of the day regardless of when the decline occurs.

The percentage levels were first implemented in April 1998, and the point levels are adjusted on the first trading day of each quarter. In 2011, those dates are Jan. 3, April 1, July 1 and Oct. 3.

Unlike a circuit breaker that stops stock trading, the Securities and Exchange Commission's Rule 48 makes it easier and faster to open the stock markets — when there are fears that the market could open with a lot of volatility that would disrupt trading.

Rule 48 speeds up the opening by suspending the requirement that stock prices be announced at the market open. Those prices have to be approved by stock market floor managers before trading actually begins. Without that approval, stock trading can begin sooner.

To invoke Rule 48, an exchange would have to determine that certain conditions exist that would cause market disruptions. Those conditions include:

It's been invoked twice: on Tuesday, January 22, 2008 and on Thursday, May 20, 2010. In 2008, the stock markets were subject to great volatility over fears of a global recession and in 2010, the European debt crisis caused panic buying and selling.