The Trade That Killed MF Global 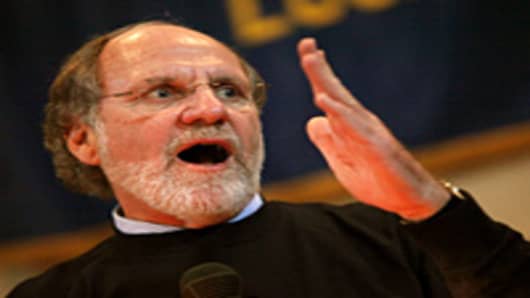 We now have a lot more details about the European debt trade that destroyed MF Global.

What’s clear is that Jon Corzine’s firm was not shooting for the moon with some high-risk trade. Instead, it was taking what it viewed as a nearly risk-free trade, hoping to make money in a very old fashioned way — skimming the spread as a middle man.

The MF Global trade is a version of what is known as a “repo-to-maturity” trade. Repos are a common financing technique that involve an agreement to sell and later repurchase of a security. Most commonly, these are very short-term agreements, often overnight.

But in a repo-to-maturity, the trade doesn't close until the maturity date of the underlying bond. This takes away "refinancing risk" that comes from having to find new financing to rollover earlier repos.

Financial journalists Izabella Kaminska and Felix Salmon have both done an excellent job at describing how this trade works. And Bethany McLean’s column explains the accounting gimmickry involved.

Basically, a repo-to-maturity created an implicit loan between MF Global and its counterparty, with the loans as collateral. MF Global received the coupon payments on the bonds, making money because those payments exceeded the interest it owed on the loan.

Note, there’s very likely a detail that I don’t think anyone else has really focused on.

There’s a strong possibility that the MF Global repos weren’t really repos at all.

In a typical repo, MF Global would sell a security in exchange for cash equal to the value of the security less a haircut. At a set later date, it would be obligated to buy back the security with that cash plus interest.

Often in a repo-to-maturity, there’s no real obligation to repurchase anything. As I understand things, this is one reason they can be used to move the securities permanently off the balance sheet.

Instead, when the bonds matured, the purchaser of the repo’d bonds would receive the final payment directly from the issuer of bonds. He would then net out the amount of the original repo loan plus interest, and hand the rest of the payment over to MF Global.

Because the loans matured in 2012 and the European Financial Stability Facility was backing them through that date, there really wasn’t much issuer risk involved. The only real risk was contained in the contractual obligation on the part of MF Global to provide additional collateral if the market value of the sovereign bonds declined by more than the original haircut.

Let’s use a quick example. Suppose MF Global repos $10 million of Italian bonds with Goliath National Bank. Both sides would agree on a haircut to the bonds, say 5 percent. So MF Global would get $9.5 million in exchange for the $10 million worth of bonds. They would also agree to an interest rate, the amount beyond the $9.5 million MF Global would owe when the repo closed. Let’s say this was 2 percent.

If the value of the bonds dropped prior to maturity, however, MF Global might owe GNB additional collateral. Let’s say the market price of the bonds drops by 8 percent. GNB would find itself under-collateralized. It had lent out $9.5 million and only held bonds valued at $9.2 million. In this situation, GNB would have the right to demand MF Global top up the collateral, providing cash or cash equivalents so that the combined cash and bonds equaled or exceeded the cash lent out.

What happened here is that MF Global’s regulators worried the firm didn’t have enough capital to meet likely margin calls and demanded it raise more capital and disclose more about the size of its positions. These disclosures worried the ratings agencies, which downgraded the company. Which made the creditors demand more collateral. Izabella Kaminska, again, does an excellent job of describing this process.

It’s hard for me to believe MF Global did not realize that it faced exactly this kind of risk. It’s very similar to the kinds of risks that brought down American International Group . How could they be so dumb?