Political change in Italy will hold market attention Friday in what could be an otherwise quiet day, with the U.S. bond market closed for Veteran’s Day. 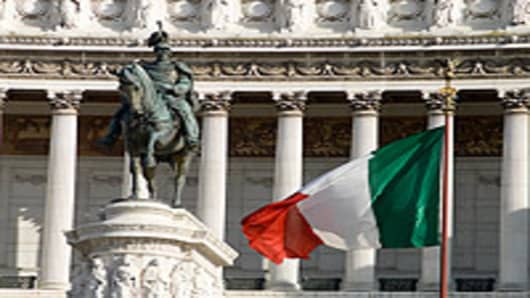 The stock market is open Friday, and it may close out a volatile week on a calmer note if Italy continues to show progress in replacing Prime Minister Silvio Berlusconi. The Italian Senate Friday is expected to vote on a package aimed at cutting spending and stimulating growth. If approved, the House then votes on the package, clearing the way for Berlusconi to resign, as promised. Speculation centered on economist Mario Monti replacing him.

Meanwhile, financial markets were relatively calm Thursday after Wednesday’s violent selling, as Italy progressed toward a change in leadership. Another economist, Lucas Papademos, a former European Central Bank vice president, was named to head the Greek coalition government. Papademos was to be sworn in Friday morning.

The only data for U.S. markets Friday is the consumer sentiment reading at 9:55 a.m. EST.

was a buyer of Italian debt Thursday, helping drive the Italian 10-year’s yield back below the psychological 7 percent level. The euro firmed.

The Dow finished up 112 at 11,893 Thursday, and the S&P 500 was up 10, at 1239. The day however, was not without its Europe-focused drama. The spread between French and German bonds rose to a record wide level, after rumors circulated that France’s credit rating could be downgraded. Standard & Poor’s reaffirmed the country’s AAA rating with a stable outlook, in reaction to the speculation which seemed to have started from a technical issue with its website that led some investors to believe S&P was changing the rating.

The U.S. Treasury market was active ahead of the Friday holiday, as the 30-year auction disappointed. The Treasury auctioned $16 billion 30s at 3.199 percent, a near 5 basis point tail. “We saw a pretty large tail in the bond, after a pretty good concession in the 10-year” Wednesday, said Brian Edmonds , who heads interest rates trading at Cantor Fitzgerald. The 30-year finished the day with a 3.13 percent yield.

“When the market cheapens up, there is demand,” said Edmonds, noting that investors may want to be long Treasurys ahead of the three-day weekend given the headline risk from Europe. He said the afternoon rally could have also been in part the result of anticipated buying by the Fed next week in the long bond, as part of ‘operation twist.’

Bernanke, in a town hall at Fort Bliss, told soldiers and their families Thursday that the high 9 percent unemployment rate is far short of maximum employment and that is why the Fed is focusing monetary policy at strengthening the recovery and jobs creation, including keeping interest rates low. He also said inflation is moderating to be 2 percent or less.