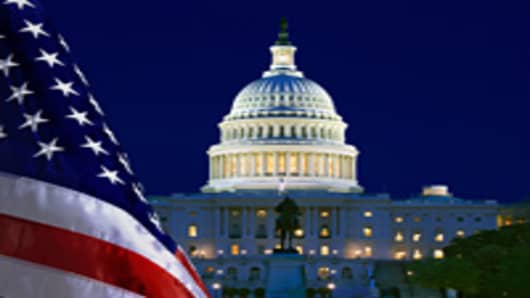 What exactly is Kirstin Gillibrand thinking?

There is very good reason to believe that House members and senators engage insider trading. A 2004 study of the results of stock trading by U.S. senators found that that, on average, they beat the market by 12 percent a year. U.S. households on average underperform the market by 1.4 percent.

A study published this year found that House members also outperform both the market, although only by 6 percent a year.

Then we have the words of notorious Washington lobbyist Jack Abramoff to CNBC’s Eamon Javers. The former lobbyist said the amounts members of Congress earned trading off their inside knowledge ranged from as little as $2,000 to as much as "several hundred thousand dollars," that was claimed by one member of Congress. Abramoff declined to name names:

"It was more, 'Look at me, I'm a real great stock trader,'" Abramoff told CNBC of the congressional bragging. "All of a sudden somebody from a background maybe in law, maybe in some other unrelated business area, all of a sudden is picking winners and losers in the market."

What’s more all of this is almost certainly legal. The insider tradinglaws cover non-public material information related to securities of public companies, but not necessarily related to the not-yet-public acts of Congress. The Securities and Exchange Commission has determined that insider political knowledge does not give rise to a violation of the insider trading rules.

“Under current law, it is unlikely that members of Congress can be held liable for insider trading,” UCLA law professor Stephen Bainbridge has written.

For years, good government types on Capitol Hill and around the country have sought to outlaw congressional insider trading but — perhaps unsurprisingly — lawmakers have a demonstrated reluctance to outlawing their own behavior.

But after "60 Minutes" focused public attention on this issue earlier this year, it seemed like the Stop Trading on Congressional Knowledge (STOCK) Act could get passed. Tea Party Republican Scott Brown, the senator from Massachusetts, proposed a bill that would attempt to outlaw insider trading on Capitol Hill. His bill was far from perfect, as Professor Bainbridge has explained. And I’ve pointed outthat the STOCK Act would create serious separation of powers problems, inviting executive branch hounding of lawmakers with little to show for it.

Nonetheless, it is shocking to see what Sen. Gillibrand is proposing to do to Sen. Brown’s bill. She’s basically proposing adding a clause that nearly cancels out the entire thing.

Not later than 270 days after the date of enactment of this Act, the Commission shall, by rule, prohibit any person from buying or selling the securities or security-based swaps of any issuer while such person is in possession of material nonpublic information relating to any pending or prospective legislative action relating to such issuer,

(A) such information was obtained by reason of such person being a member or employee of Congress; or

That’s pretty straight forward. It orders the SEC to enact a rule that is actually a bit more strict — because it explicitly includes swaps — than the insider trading rules that apply to the general public. If a congressman or senator traded on information while in possession of material non-public information gained because he or she hold office, that lawmaker is in violation. If a staffer or other associate of a lawmaker trades on that information, they are also in violation.

Here’s what Gillibrand has proposed:

Not later than 270 days after the date of enactment of this Act, the Commission shall, by rule, prohibit any person from buying or selling the securities or security-based swaps of any issuer while such person is in possession of material nonpublic information relating to any pending or prospective legislative action relating to such issuer,

(A)(i) such information was obtained by reason of such person being a member or employee of Congress; or

(B) the person acted with the intent to assist another person, directly or indirectly, to use the information to enter into, or offer to buy or sell the securities of such publicly traded company, based on such information.

Note: there’s a clear typo in this, as there’s no conjunction between clause (A) and clause (B). As Professor Bainbridge points out, the word “and” is almost certainly the missing conjuction.

The effect of this, however, is to gut the law.

It now would mean that a congressmen or senator would only be in violation if he or she traded on such information and intended to assist another person to trade on the information.

If the lawmaker trades on his or her own, without helping out anyone else with the insider tip, that’s perfectly fine under Gillibrand’s version of the bill.

In other words, Gillibrand’s bill wouldn’t outlaw insider trading by congressmen or senators at all. Lawmakers would be completely free to trade on non-public material information gained in the course of their congressional duties. Legal problems would only arise if they included outside parties in on their insider trading.

“This is just nuts,” Bainbridge writes.

It's actually worse than nuts. It is a scandal.

Gillibrand should be embarrassed to submit this into law — especially because the latest academic study shows that members of her party likely engage in more insider trading, or profit more from insider trading, than Republicans.

Someone should ask Elizabeth Warren, who is running against Sen. Brown up in Massachusetts, whether she supports her party-mate Gillibrand’s version of the law or Scott Brown’s version.