Jon Huntsman abandoned his once-promising campaign for the Republican presidential nomination on Monday and endorsed Mitt Romney as the man "best equipped to defeat Barack Obama'" in the fall. 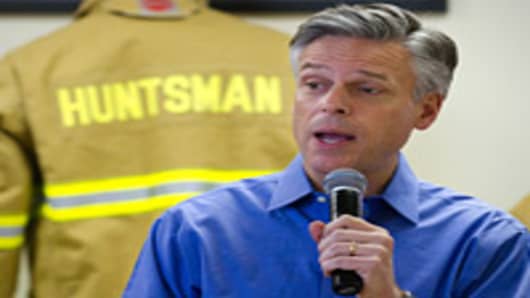 The former Utah governor coupled his announcement with an appeal to the remaining contenders to stop attacking one another in television commercials. "At its core, the Republican Party is a party of ideas, but the current toxic form of our political discourse does not help our cause," he said.

He noted that he and Romney have had their differences, and he did not respond to questions when asked if he still believes — as he said while campaigning for last week's New Hampshire primary — that the former Massachusetts governor is out of touch and unelectable.

Huntsman said he was suspending his candidacy, but his endorsement made it clear that was a euphemism. He dropped out less than a week after finishing third in New Hampshire, the state where he had staked his candidacy. While he has campaigned for nearly a week in South Carolina, he lacked the funds for television commercials or other essentials of a modern campaign.

Given Huntsman's decision to back Romney, his departure seemed unlikely to clarify the overriding question of the Republican campaign, whether conservative voters could or would unify behind either Rick Santorum, Newt Gingrich or Rick Perry to create a strong conservative challenger to Romney.

Huntsman's resume had suggested he could be a major contender for the Republican presidential nomination: businessman, diplomat, governor, veteran of four presidential administrations, an expert on China and foreign trade. But the former ambassador to China in the Obama administration found a poor reception for his brand of moderate civility that he had hoped would draw support from independents, as well as party moderates.

Huntsman was almost invisible in a race often dominated by Romney, a fellow Mormon. One reason was timing. For months, Romney and other declared or expected-to-declare candidates drew media attention and wooed voters in early primary states.

Huntsman, however, was half a world away, serving as ambassador to China until he resigned in late April. Nearly two more months would pass before his kickoff speech on June 22 in the shadow of the Statue of Liberty. The former Utah governor had already acknowledged that expectations for him in South Carolina's primary this week will be "very low." Word of the Huntsman withdrawal came on the same day that The State, South Carolina's largest newspaper, endorsed him for president.

Although Huntsman was viewed as having little chance of finishing strong in South Carolina, his endorsement of Romney could give the former Massachusetts governor, who leads in state polls, even more of the look of inevitability.

The move comes as pressure has been increasing on Texas Gov. Rick Perry to leave the race to allow South Carolina's influential social conservatives to unify behind either former Pennsylvania Sen. Rick Santorum or former House Speaker Newt Gingrich.

Santorum worked over the weekend at consolidating conservatives, trying to parlay into support in South Carolina the decision Saturday by an influential group of national Christian conservatives to back him.

"I think it's important that we eventually consolidate this race," Santorum told reporters Monday at a news conference in Columbia. He stopped short of urging Perry, who has shown little traction in South Carolina, to quit the race.

"That's up to the candidates themselves to decide," Santorum said.

To stand out in a crowded field, Huntsman positioned himself as a tax-cutting, budget-balancing chief executive and former business executive who could rise above partisan politics. That would prove to be a hard sell to the conservatives dominating the early voting contests, especially in an election cycle marked by bitter divisions between Republicans and Democrats and a boiling antipathy for Obama.

"I don't think you need to run down somebody's reputation in order to run for the office of president," he said.

While Huntsman was often critical of his former boss — he joined those saying Obama had failed as a leader — and occasionally jabbed at Romney, he spent more of his time in debates pushing his own views for improving the economy rather than thumping the president or his opponents.

In light of his work in the Obama administration, Republicans seemed wary of Huntsman. While he cast his appointment in August 2009 as U.S. ambassador to China as answering the call to serve his country, his critics grumbled that he had in fact been working on behalf of the opposition.

Huntsman was conservative in matters of taxes and the reach of the federal government, but he was out of step with most conservatives in his support of civil unions for gay couples. On matters of science, he poked fun at his skeptical rivals in a pre-debate tweet: "To be clear. I believe in evolution and trust scientists on global warming. Call me crazy."

In the end, Huntsman didn't seem to register, crazy or otherwise, with Republicans looking for an alternative to Romney or a winner against Obama. He was routinely at the bottom of national polls, barely registering at 1 or 2 percent, a reflection of the faint impression he made in the GOP debates.

His campaign put all its emphasis on the New Hampshire primary, hoping that face-to-face politicking in the first-in-the-nation primary would pay off with a strong second-place finish or a surprise victory in Romney's backyard. While other GOP candidates spent December in Iowa, the Huntsman campaign ignored its leadoff caucuses, where social conservatives were all but certain to give him short shrift.

Central to Huntsman's New Hampshire strategy was its open Republican primary, which allowed independents to vote along with declared party members. He gambled that he could attract moderate voters, Republicans and independents alike, by presenting himself as a successful conservative leader who wasn't interested in engaging in a culture war.

He called his third-place showing a "ticket to ride" to South Carolina, but his distant finish behind Romney and runner-up Ron Paul was widely regarded as lackluster.

Huntsman, 51, was born in Redwood City, Calif., and raised in Utah. His father, an industrialist and at one time a Nixon administration official, founded Huntsman Chemical Corp. in 1982. Now the Huntsman Corp., it reported revenues of more than $9 billion in 2010.

The younger Huntsman drifted a bit as a young man. He attended high school in Salt Lake City but dropped out to play keyboards in a band.

He later attended the University of Utah, then dropped out to serve two years as a Mormon missionary in Taiwan, where he learned to speak Mandarin.

He returned to the University of Utah in 1981 and later worked as an intern for Sen. Orrin Hatch, a Republican from Utah, and as a staff assistant to President Ronald Reagan. He left college to join the Huntsman Corp. in 1983, the same year he married Mary Kaye Cooper. He studied international politics at the University of Pennsylvania, earning a bachelor's degree in 1987.

While he served in the administrations of both George H.W. Bush — he was ambassador to Singapore in 1992 — and George W. Bush, Huntsman first won elective office in 2004 as Utah's governor. He was re-elected by a 3-1 margin in 2008, then resigned the following year to be America's top diplomat in China.